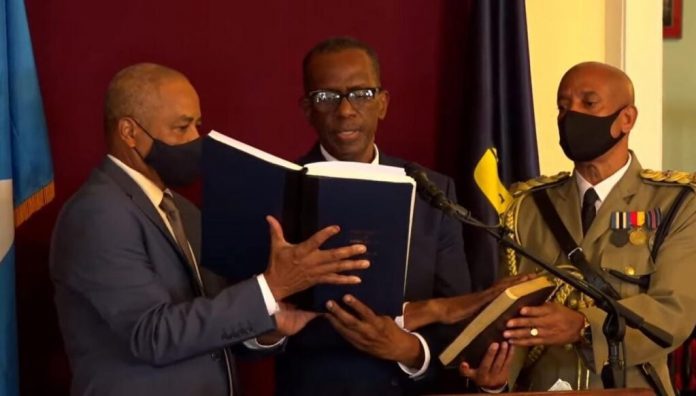 The new Cabinet of St Lucia Prime Minister Phillip J. Pierre will be sworn into office on Thursday, August 5, according to an official statement issued by the Office of the Prime Minister.

However, the statement gave no indication as to the composition of Pierre’s cabinet that will be sworn in at the Mindoo Phillip Park in the heart of the prime minister’s Castries East constituency.

The Attorney General, Leslie Mondesir, was sworn into office on Friday. Former Senate President, Claudius Francis, is widely expected to return to that position when the new Parliament is convened.

Pierre led the St. Lucia Labour Party (SLP) to a convincing victory winning 13 of the 17 seats at stake in the July 26 general election and has since pledged to” serve all the citizens of the country regardless of their social class or station in life”.

The statement said that since his appointment, Prime Minister Pierre has been holding discussions with senior public servants “to ascertain the current state of the country’s affairs”.

He also met with the Chief Medical Officer, (CMO) Dr. Sharon Belmar George, who provided a briefing on the coronavirus (COVID-19” and critical health security matters.

St. Lucia has recorded 88 deaths and 5,567 cases linked to the virus and on Thursday, the Ministry of Health and Wellness warned that “we are still in a vulnerable position based on high risk of the introduction of COVID-19 and the other Variants of Concern from developed countries and neighboring Martinique.

“We are also at risk for transmission of COVID-19 in-country due to poor compliance to protocols. We note the increase in social activities across the island especially on weekends and the general relaxation of the public health measures,” it added.

The statement from the Office of the Prime Minister said that Pierre will address the nation “on the country’s state of affairs once a full assessment has been completed following meetings with the relevant Government Ministries”.