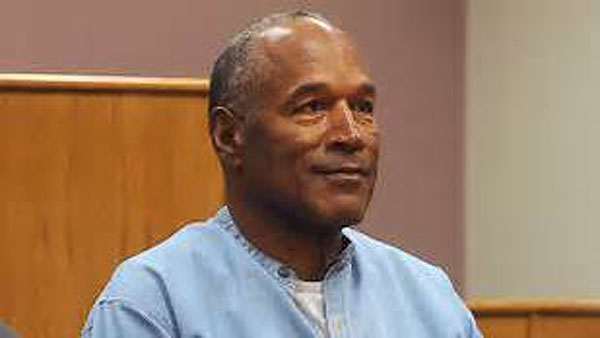 Early Sunday morning, former NFL football star O.J. Simpson, 70, was released from the Lovelock Correctional Center in Nevada where he had been held since 2008 for an armed robbery at a Las Vegas casino hotel. His release is based on a parole period of 5-years.

According to reports Simpson’s early morning release was deliberate as prison officials wanted to avoid public attention. Simpson was picked up by a friend in a car at 12.08am, without any reports present to witness the event. The friends name and where he was taking Simpson is not known.

Earlier this year when Simpson finally succeeded in having his release authorized by a Nevada parole board he indicated he wanted to relocate to Florida where it is understood he has close friends and family. One of his closest friends, Tom Scotto, lives in Naples, Florida. After the parole hearing Scotto had suggested Simpson would stay with him and his family.

A report in the Sun Sentinel, a South Florida newspaper, said Scotto conveyed by text message an hour after Simpson’s release that Simpson was with him. But Scotto did not answer texts asking where they were going or whether members of Simpson’s family were with them.

Another report in the Naples Daily News indicated that Scotto confirmed by text that he and Simpson were on their way to Naples.

However, Florida corrections officials say they had not received a parole transfer request for Simpson and had not been contacted by their counterparts in Nevada.

Prior to his arrest in 2008, O.J. Simpson lived in a house he purchased some years earlier in West Kendall. That house was lost to foreclosure while Simpson was serving his sentence in Nevada.

Already famous as an outstanding running back in the NFL, and the high profile pitchman for Hertz Car Simpson raised to the pinnacle of national infamy in 1994 when his wife Nicole and he friend Ron Goldman were fund brutally murdered at Nicole’s home. Charged for the murders, Simpson was found not guilty after a 13-month trial in Los Angeles. He was, however, found liable for the couple’s death by a civil court jury and order to pay $33.5 million to the victims’ families.

Under the terms of Simpson’s parole, which could be reduced for good behavior, he cannot use illegal drugs and can drink alcohol above state limits set levels for driving; cannot associate with felons, and must tell Nevada authorities where he is residing.