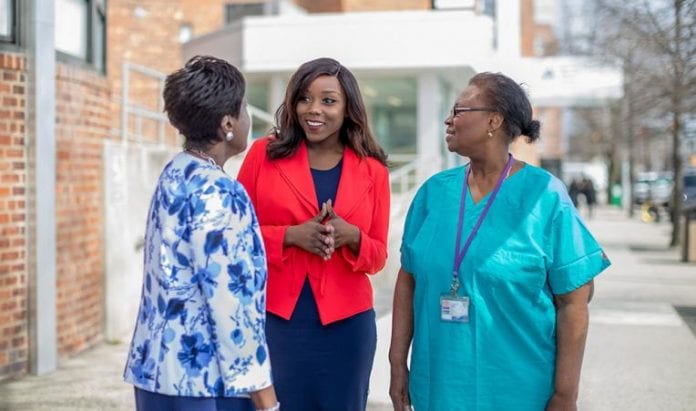 NEW YORK – Less than a week after she won the special election to replace former New York City Councilmember Jumaane Williams as representative for the 45th Council District in Brooklyn, Haitian American Farah Louis is already back on the campaign trail, urging votes to re-elect her in the Democratic Primary on June 25 for the much-coveted district seat.

“The special election race wasn’t easy,” said Louis, the daughter of Haitian immigrants, in an email message to supporters, adding “when the journey got rough, you all stuck by my side, did not get discouraged and uplifted me in ways that words cannot define.

“This campaign has not only shown me the resiliency and power of this district but the resiliency and power of myself. It is my deepest honor to serve as the elected representative of District 45 in the New York City Council and hit the ground running. But we must remember, the journey isn’t over yet. Re-elect me as your City Councilwoman,” she said.

Even though Louis handsomely won the special election last Tuesday in the crowded field to replace Williams, the Grenadian-American legislator, who was recently elected New York City Public Advocate, she must serve out the remainder of Williams’s term, which runs through 2021.

But she must first triumph in the Democratic Party primary on June 25 and the general election in November.

Louis, who served as deputy chief-of-staff and budget director for Williams in the 45th Council District in Brooklyn, defeated seven other candidates in the intense special election.

Williams did not endorse Louis in the race. Instead, he endorsed the first runner-up, Monique Chandler-Waterman, the daughter of Jamaican and Barbadian immigrants, who served as the former councilman’s community outreach director in the district that comprises the Brooklyn neighborhoods of Flatbush, East Flatbush, Midwood and Canarsie. Most of the candidates in the race were either born in the Caribbean or are of Caribbean heritage.

With the strong backing of the Haitian and Jewish communities in Brooklyn, and support from many elected officials and labour unions, Louis, in the special election, garnered over 41 per cent of the votes.

The decision of the other candidates is uncertain. But should they decide to challenge Louis in the Democratic Primary, they are most likely to once again split the ballots from English Caribbean voters in the district, giving Louis an easier passage to victory.

More than 188,000 people live in the 45th Council District, of which about 61 percent are either Caribbean American or African American, according to reports.

Analysts say Louis has the Haitian and Jewish community votes “locked down,” and she would again count on them to put her over the top.

But Louis is not taking anything for granted, appealing to all voters for their support in the upcoming primary.

“From the very beginning of this campaign, up until this past week, I have seen the passion and support rallied behind our joint vision. “As a proud resident, born and raised in the district, I am forever inspired and empowered by your dedication to our community,” she said in her email note.

Louis urged constituents to join her in her fight for affordable housing, funding for education, quality healthcare and “economic development for our neighborhoods in Brooklyn and NYC (New York City).

“Team Farah needs dedicated, talented and hardworking people like yourselves to be the soldiers, change makers and strategists that will lead us into a historical win in the 45th City Council District,” she said.