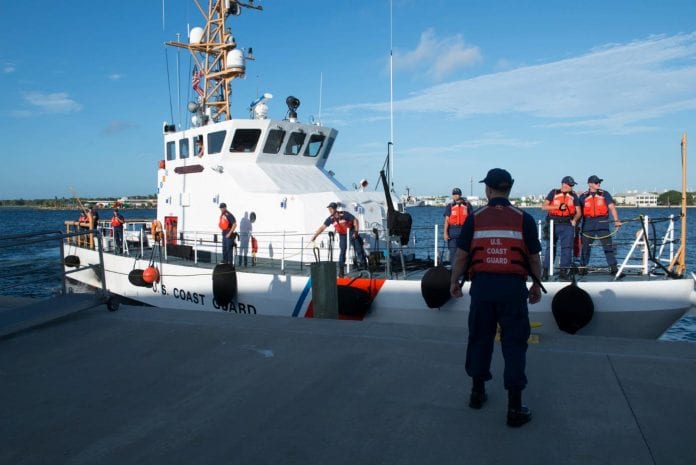 Four Dominican Republic nationals were arrested when they were interdicted by the US Coast Guard Cutter Joseph Napier in the Mona Passage waters off Puerto Rico.

The Coast Guard said the crew of a maritime patrol aircraft detected a suspicious go-fast boat speeding towards Puerto Rico from the Dominican Republic, about 38 nautical miles west of Desecheo Island, Puerto Rico.

Watchstanders at Coast Guard Sector San Juan diverted the Joseph Napier to interdict the suspect vessel – “which failed to heave to and performed aggressive maneuvers to avoid interception.”

During the pursuit, the Coast Guard said the Joseph Napier boarding team members “observed the suspects jettisoning objects overboard, and one of the suspects brandishing a knife at them.”

“The Joseph Napier forced the non-compliant vessel to a full stop by employing disabling fire to the suspect vessel’s engines,” the Coast Guard said.

Miguel Rivera-Cuadrado, Coast Guard Investigative Service Resident Agent in Puerto Rico, said it was “a successful interdiction thanks to the great interagency coordination communication and execution between the Coast Guard units involved.

“The Coast Guard’s shared resolve with our federal and local law enforcement partners is to protect the citizens of Puerto Rico and the US Virgin Islands by stopping and keeping these maritime threats from entering our shores,” he said.