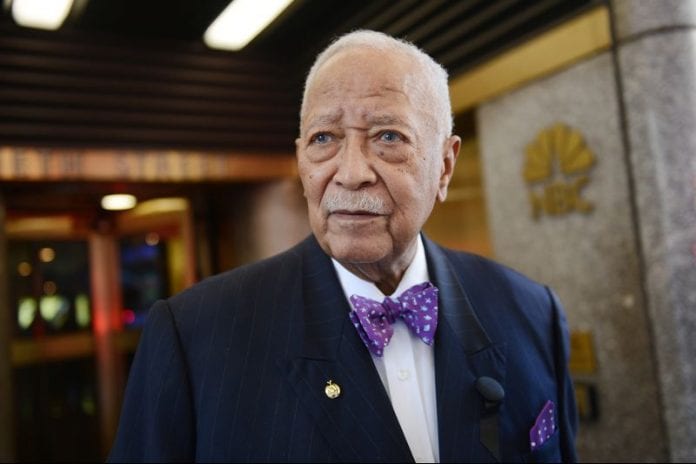 Caribbean American legislators have paid tribute to New York City’s first and only Black Mayor, David N. Dinkins, who died Monday night at his home on the Upper East Side of Manhattan. He was 93.

“The city benefited from his leadership, and so many Black New Yorkers benefitted from his pioneering example,” he told the Caribbean Media Corporation (CMC).

“For me, a young man when he was elected, he was inspiring. I could not be the fourth citywide Black elected leader, if he were not the first. It was a privilege to have met and spent time with him, and it is an enduring honour to work in the building he did for so long, one that now bears his name.”

The Public Advocate noted that Dinkins assumed his role in City Hall and in history at a time when the city faced compounding crises of economic turbulence, racial injustice, and systemic failings in housing, policing and healthcare, among other things.

“The mayor sought to steer the city through the moment and move it forward. He took up that mission not with bombast or ego, but with deliberative determination to continue down the path of liberty, justice and equity,” Williams said, adding that Dinkins was “a moral center for the city with a clear vision for a better New York.”

In creating the Civilian Complaint Review Board (CCRB), in leading the Safe Streets, Safe City initiative, among many other areas, Williams said Dinkins “paved the way for progress we would later see and which others would try to claim credit for.

“He took strong interest in uplifting and supporting young people like myself, and he focused on creating direct and indirect opportunities for growth that I and others now try to build upon,” the Public Advocate said.

“And for his work, he was mercilessly attacked and vilified by those who would rather stoke resentment than solve problems.

“Through all of the criticism, he continued to do the work he knew to be right. After he left office, he continued to be a pillar of leadership, and a role model for people across the borough and the nation.”

“We owe him not only a debt of gratitude but a commitment to try and realize his vision for what the gorgeous mosaic of New York City can be – uplifting each piece, and recognizing that it is at its strongest and most beautiful when the pieces are brought together, as was Mayor Dinkins’ mission,” Williams said, adding “his passing leaves a gap in that mosaic as New York feels a historic loss.”

Brooklyn Democratic Party chair Assemblywoman Rodneyse Bichotte, the daughter of Haitian immigrants, said Mayor Dinkins, who served a single four-year term during the 1990s, will be remembered as “a pioneer in the history of our city.

“As New York’s first Black mayor, he broke barriers and sought to unify New Yorkers during a tense time in our city’s past,” said Bichotte, who represents the predominantly Caribbean 42nd Assembly District in Brooklyn.

“I am grateful for Mayor Dinkins’ contribution to our city, which helped pave the way for others, like myself, to serve,” Bichotte told CMC.

Under Dinkins’s term, she said the overall crime rate in the city fell 14 percent, and the homicide rate dropped 12 percent.

“It was the first time in more than a decade that the city became safer,” Bichotte said.

New York City Councilwoman Farah N. Louis, another Haitian American legislator in Brooklyn, said that, from the United States Marine Corps to city and state government, Mayor Dinkins was “a man of humility with a heart for service to others.

“During his mayoralty, he championed issues that disproportionately affected marginalized populations across our city,” said Louis, the daughter of Haitian immigrants, who represents the 45th Council District in Brooklyn.

“Today, we mourn the loss of a man who believed in building communities and preserving our city’s unparalleled cultural diversity,” she added.

“I want to express my deepest sympathies to his family and friends, and may God continue to bless and comfort them during this very difficult time,” said Councilman Eugene, representative for Brooklyn’s 40th Council District, the first Haitian to be elected to New York City Council.

“Mayor Dinkins was not just the first Black mayor; he was not just a symbol. Through his actions on behalf of lower-income people, he was both our effective advocate and confirmation of a long-held hope that our lives mattered to our government.

“May we all follow in his large footsteps and add our bright stitch to the gorgeous mosaic of New York City that he so loved,” Adams urged.