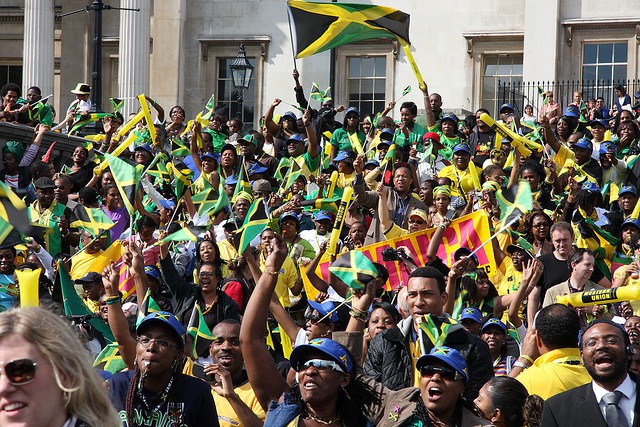 Jamaicans in South Florida are bursting with pride at the outstanding performances of Usain Bolt and Shelly-Ann Fraser-Pryce at the IAAF Championships underway in Beijing, China.

Bolt won the 100meters in his season best 9.79 seconds, while Fraser-Pryce won the women version in 10.76secs. While Fraser-Pryce has been showing good form during the current 2015 track season, and breezed through the heats and semi-finals at the World Champs, some people had doubts about Bolt’s ability to win the race.

“I must confess I had doubts” said Percy Aries who with his wife Barbara runs “Swift Spikes” a camp for young aspiring athletes in Homestead, Miami-Dade. “”Usain didn’t look sharp in either the heats or the semi-finals. Plus, he hasn’t really won many races this year. However, after he stumbled in the semi-final and recovered to run 9.96 my hopes surged. To see he was able to catch, and pull away to beat an over-confident (Justin) Gatlin indicated he’s truly one of the greatest sprinters of all times.”

Jamaican Consular General, Franz Hall, proudly congratulated both athletes. He said their victories exemplified “the dedication, drive and commitment of Jamaicans to excel in their chosen endeavor. Jamaican athletes and people are remarkably resilient, and for that we all can be very proud.”

About a dozen teen girls; Caribbean-Americans, Hispanics, and African-Americans, trying to hone their athletics skills at “Swift Spikes” screamed with elation as a video of Fraser-Pryce winning the 100meters was replayed on Monday. “For these girls Shelly-Ann is their hero, Barbara Aries said. “They’re not only impressed by her winning three World Championships and two Olympic gold medals in the 100meters, but more her consistent humility and  dedication to the sport. She’s an outstanding role model for these young girls.

At the time of writing Bolt and Fraser Pryce were set to continue  shining in Beijing. Bolt won the 200meters semi-finals on Wednesday, running easy, easing up some 20 meters from the tape, in 9.95secs. Gatlin won his semifinal in 19.87secs, indicating he wants redemption for losing the 100meters to Bolt.

“With the 200 being Bolts better race, not hindered by starting problems as in the 100, he should win his third 200 at the World’s,” Aries said.

Shot-putter O’Dayne Richards also made Jamaicans proud becoming the first to win a medal, the bronze, in the event for his country. Jamaican 400 meters women athletes also made history with all four competitors, Novlene Williams-Mills, Shericka Jackson, Christine Day, and Stephenie Ann McPherson, making it to the 400 finals scheduled for Thursday.

However, despite the pride at successful athletes, there were disappointments. These included Asafa Pwell failing to medal in the 100m; the Jamaican men failing to make it to the 400meters finals after three competitors ran well in the heats, and the failure of usually impressive 400meters hurdler Karliese Spencer who finished eighth in the 400 meters finals. Also disappointing for the Caribbean was the failure o Grenadian Karani James to win gold in 400 meters finals, although he won the bronze medal.