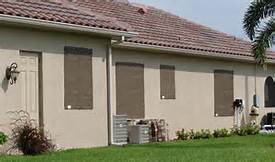 As Brown pumped up his 10-foot rubber raft he was certain that he had all he needed to ride out the dangerous Hurricane Irma and come out without a scratch.

Brown, a 38-year-old Jamaican with two small sons, a mother, grandmother and the mother of his children to take care of, said going to a designated hurricane shelter was not among his list of hurricane preparedness measures.

“I survived Hurricane Gilbert in Jamaica with much less preparation than I have made now. We will be fine. The only thing I worry about are the alligators and snakes that might be swimming in any floodwaters that may occur,” he told CNW.

In the firing line

Palm Beach County was in the direct firing line of the weather system but early Saturday morning Irma changed course slightly after interacting with mountainous Cuba and veered westwards taking most of West Palm Beach out of the projected cone. However, with Irma being some 300 miles wide, the county is expected to experience heavy rain and tropical storm winds.

In the neighboring community of Shoma, residents spent Friday busy shuttering down and seeking last minute supplies. Most of the residents in Shoma have also decided to stay put. Sherille Felix who was born in Florida to Honduran parents, e was also of the view that going to the nearby shelter at Palm Beach Central High School was not in her hurricane survival plans.

“This too will pass. We will survive as long as we do the necessary battening down and have enough food, water and other supplies,” Felix said.

Shoma is home at le 300 households and most of the residents were of the same mindset as Felix. Every home in the complex was battened down and some residents were busy imbibing alcohol and listening to music in anticipation of the feared Hurricane Irma which has accounted for more than 20 lives in the Caribbean so far.

Irma will come and go

“We are staying put. Irma will come and go. This part of wellington is not flood-prone so we should have nothing to fear,” A resident of Haitian descent who said his name was Dave, said.