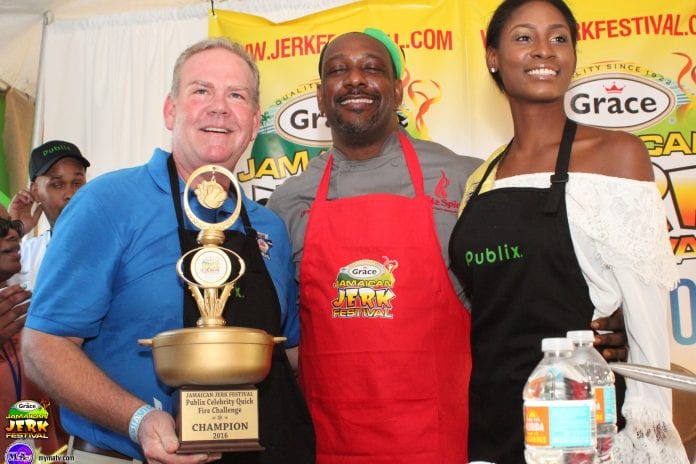 For the eight consecutive years, one of Florida’s largest corporations, Publix Super Markets. Inc., popular known as Publix, is the largest non-Caribbean corporate sponsor of the premier Caribbean cultural event.

Marketing pull of the Festival

According to Eddy Edwards, CEO of Jamaican Jerk Festival, USA, Inc. “The fact that such a corporate giant as Publix, and a leader in America’s grocery business has been a long term sponsor of the Festival is indicative of the cultural quality and the  marketing pull of the Festival, and the Caribbean American community in South Florida.”

Priding itself as the primary distributor of an eclectic variety of fresh and packaged foods in Florida, it is fitting that Publix identifies directly with one of the highlights of the festival, the cooking competition known as the Publix Jerk Cook Off held in the Publix Pavilion.

In the pavilion, Publix hosts exciting cooking demonstrations and competitions featuring Chefs of distinction and local and international celebrities. These outstanding chefs and celebrities  compete for bragging rights while displaying their culinary skills, demonstrating innovative jerk recipes. Then, in another cook-off, the lively Quick Fire Contest other local chefs compete with each other for cash prizes of over $2,500, while wine experts will pair spicy jerk dishes with fine wines. All the winners of the respective cook-offs have a chance to win the coveted Dutch Pot Trophy.

Publix’s Media and Community Relations Manager Nicole Krauss said, “As a proud sponsor of the Jamaican Jerk Festival for the past eight years, we look forward to celebrating the sights, sounds and flavors of Jamaica and the Caribbean with our customers both in our stores and at the festival.”

The support of the powerful supermarket chain goes beyond sponsorship of a feature of the Festival. In fact, Publix’s direct participation commenced from mid-October. To make the most of the festival, the company begun to host several in-store events from October 14. These events continued through to last Monday, November 6 in conjunction with other sponsors like Guinness and Western Union.

For years the chain of supermarkets has carried a range of Caribbean foods demanded by Caribbean Americans. Most of the supermarkets feature an aisle complete with food items from the Caribbean region.

“I often shop at Publix,“ said Nina Mercer, Caribbean American resident of Davie, “I easily find products I was accustomed to purchase in Jamaica, and the staff is so friendly and professional. Plus, Publix seems to be always reaching out to the Caribbean community with its promotions and advertisement.”

The supermarket’s collaboration with the Jamaican Jerk Festival has borne out another benefit. The collaboration has facilitated Publix’s partnership with a major producer and distributor of Jamaican and other Caribbean food items, Grace Jamaica, the title sponsor of the Festival Through this partnership Publix has a direct link to, and distributes, Grace Jamaica products, which are in high demand by Caribbean-American consumers. This is another factor that has endeared Publix to Caribbean consumers.

“The collaboration of Publix, Grace Jamaica and Jerk Festival USA, is a win-win situation,” said Edwards. “All three companies, and our other sponsors, recognized, and are benefiting, from this growing, and potent Caribbean market. Moreover, the initiative taken by Publix to sponsor this event and cultivate the Caribbean American market not only by supporting the Festival, but regularly promoting its services and goods to the Caribbean-American market, should be a positive indicator to other large corporations to be actively involved in this lucrative market. Puplix grasped the initiative, and leads the way as a major non-Caribbean corporation doing business in the Caribbean American community.”