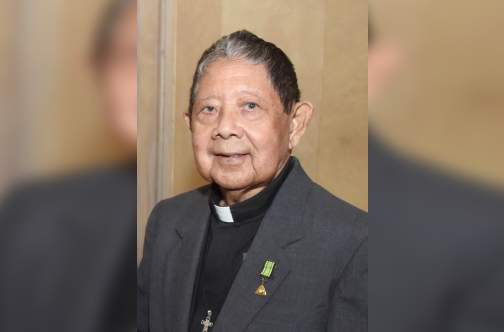 South Florida resident, the Reverend Father Easton Lee, former broadcaster, author, actor and theatre director, died on January 18 in a local hospital after a short illness. He was 89.

Lee was born in Wait-a-Bit, Trelawny in 1931 to a Chinese father, and a Jamaican mother. He spent his formative years in Siloah, St. Elizabeth. He attended Siloah Primary, Duncans Primary and Windsor High schools.

After leaving school, he joined the Caribbean Thespians Dramatic Society, then the leading group of its kind in Jamaica, and soon established himself as an actor.

His professional career was spent chiefly in the field of communication where he excelled as a radio and television announcer at the Jamaica Broadcasting Corporation and director of audio-visual programming at Jamaica Information Service.

Lee relocated to South Florida in his later years and quickly got involved in the region’s cultural scene. He was instrumental in showcasing talent, mostly in classical music and dance from Jamaica annually at the Holy Family Episcopalian church in Miami Gardens, where he also officiated as an assistant priest and other venues.

Also renowned for his wit, he gave several well-received one-man performances across the region humorously reflecting on his youth as a “likkle Jamaica Chiny bwoi” growing up in rural Jamaica.

An author and playwright, one of his more successful plays was “The Rope and the Cross” written in 1979. The ‘Jamaicanized’ version of Christ’s crucifixion became one of the most popular plays over the annual Easter season since.

The Rev. Horace Ward, rector of Holy Family, paid the following tribute to his dear friend: “It was a heavenly joy when in 2007 Easton, Jean, his beloved wife and I reconnected. It happened in and within the love of God’s beloved community of Holy Family Episcopal Church, and the relationship between Easton, Jean and Holy Family grew into “a love story” lived in so many amazing ways.

“Easton kept me rooted as a person to ‘give and take’ God’s love and ‘fired me up’ to serve with love through the years—it came through his deep insight of the Bible and the wisdom from his wealth of experience.”

Other members of the Holy Family also paid tribute.

David Ward said, “Father Lee always knew how to connect with people, young and old—from the Caribbean or not—in any emotional state, and bring joy into their lives with the right expression of love: a smile, a facial expression, a kind gesture, and uplifting words.”

In her tribute, church administrative assistant Beverly Findlay said, “Easton Lee will be remembered for his love for God, the Arts and Jamaica.”