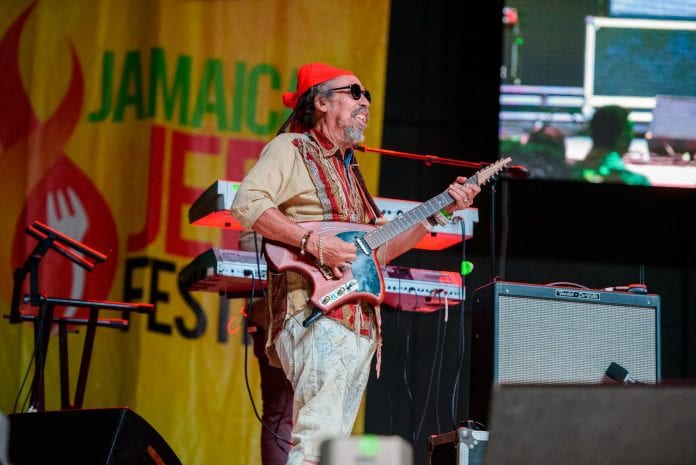 MIRAMAR, Florida – It may have seen a change in venue, but fans of the Grace Jamaican Jerk Festival streamed into Miramar Regional Park on November 10 for its 18th staging. Stalls, packed with Jamaican culinary delights, did brisk business and fans who came for the music were not short-changed.

One of South Florida’s premier calendar events, the Grace Jamaican Jerk Festival was previously held at Markham Park in Sunrise which, like Miramar, has a sizable Jamaican community.

Abdul Muhsin, chairman of the organizers, Jamaican Jerk Festival USA Inc, and technical director of the event, said his team was pleased with turnout and response to their new home.

“The venue worked out very well. We are getting rave reviews from the artists, vendors, sponsors and patrons. They all love the atmosphere and the ambience we were able to create,” he told Caribbean National Weekly.

He added, “The production got rave reviews, also facilities management stated that we had the best production so far in that venue. We are very proud of that.”

The day-long event was dotted by stalls from brand sponsor Grace Jamaica, as well as Jamaican-owned companies that are a staple of South Florida commerce. These include Donna’s Restaurant and Jerk Machine Restaurant.

Long lines at tents were the order of the day as patrons savored diverse jerked recipes, from chicken to pork and fish.

Among the attendees at the festival wee Miramar Mayor Wayne Messam who won the popular Celebrity Cook Off, defeating Stephen “Cat” Coore, guitarist of the Third World band.

Third World were also part of the entertainment package, and they did not disappoint. They had fans dancing and singing along to favorites like Now That We Found Love and 96 Degrees (In The Shade) as well as songs from More Work to be Done, their new album.

Muhsin, who joined the festival team in 2002, said sponsors were thrilled with the 2019 Grace Jamaican Jerk Festival.

“All of our sponsors agree that this venue brought new excitement and desired marketing value. Miramar has the highest density of Caribbean residents in Florida, and this gave our sponsors a great opportunity to put their product in front of a lucrative, active consumer market,” he explained. “We look forward to the growth of this festival at this location.”