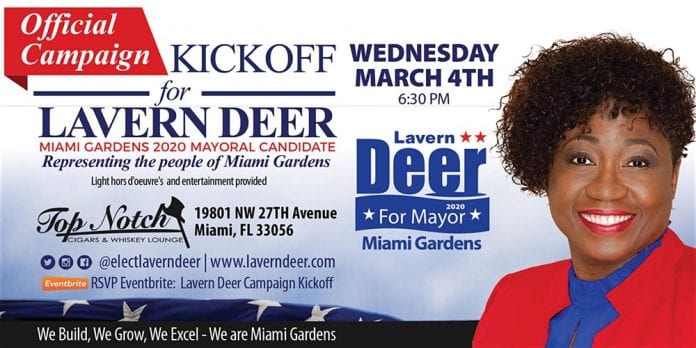 MIAMI, Florida – Lavern Deer, senior program project coordinator for the Broward County Human Services Department, and founder/CEO for the non-profit organization Female Development World Organization Inc. will launch her election campaign for mayor of the City of Miami Gardens on March 4, at the Top Notch Whiskey and Cigar Lounge on Miami Gardens.

Jamaican-born Deer, who migrated to The Bahamas at age 9 and settled in Florida later, has been a resident of Miami Gardens since 1990 and is honored and confident she’s well-qualified to serve the city.

During the launch event, Deer will present her priorities to revitalize the city of Miami Gardens and positively serve its   residents. She says her strategic plan as mayor is to focus on what she considers to be the top six priorities impacting the city: crime reduction, job creation, elderly affairs, youth development, housing and review of the redlight camera process.

In 2013, Deer designed the successful Reggae Girlz Awareness Campaign which encouraged youth development and facilitated the Jamaica National Women Soccer Team to become the first Caribbean nation to qualify for the FIFA Women’s World Cup. She has also organized and chaired the Jamaica High School Alumni Sporting Network Inc. (JHSASN) which has seen the development of the All Alumni High School Soccer tournament,  now a staple event in South Florida.

She founded Female Development World Organization Inc. (FDWO) with the mission to positively impact the education, health, and social development of girls and young women across all communities by aggressively engaging their leaders, organizations, and government representatives to foster increased and consistent awareness of the systemic problems impeding such development, most specifically, in socio-economically challenged communities.

Some of the municipalities addressed by the FDWO includes: Miami Gardens, Fort Lauderdale, Oakland Park, Margate, Tamarac and North Miami Beach. FDWO and Lavern have taken its mission a step further by working with Florida legislators to propose language for the Human Trafficking Education in Schools Bill. The bill is supported by the Department of Education and has successfully passed all its Senate Committees.

In 2018, Deer successfully completed a month-long training on human trafficking through Shared Hope International and now serves as a Human Trafficking Expert and Subject Matter Volunteer Ambassador of Hope.