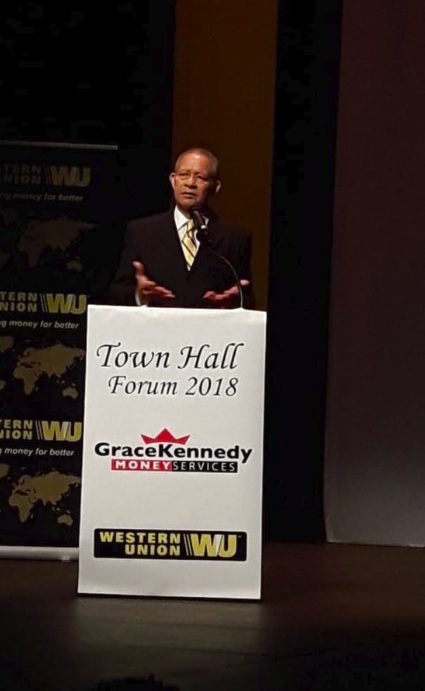 In his address to members of the Jamaican Diaspora at the Lauderhill Performing Arts Center last Saturday, former Jamaican Prime Minister Bruce Golding urged Jamaicans to organize themselves into a formidable political force. This he said is necessary “to defend and protect key issues that are important to you as American citizens.”

The former prime minister was the keynote speaker at a Town Hall meeting jointly presented jointly by financial remittance giant Western Union and its Jamaican agent Grace Kennedy Money Services (GKMS). Over 350 Jamaicans living in South Florida ignored the inclement weather to attend the meeting to hear  Golding and other speakers.

In his far-reaching address, Golding praised the Diaspora for its growth and contribution made to the development of Jamaica, nor only through the strength of significant financial remittances, but in many other ways it has helped Jamaican public and private institutions.

One of the strongest migrant communities

He said the Jamaican community is one of the strongest immigrant communities in the US, especially in the New York and South Florida regions. “The Jamaica community in the Diaspora is a self-sufficient community, with the majority owning their own homes, employed and having health insurance and significant financial savings.”

However, Golding said, he and other Jamaican are concerned that there are threats to the Jamaican-American, and other Caribbean-American, communities, because of the immigration policies of the Trump administration.”

“We are getting the sense significant changes are taking place in the US. We sense certain changes are being rolled back The progress of Rev. Martin Luther King is being pushed back to the dark days of American history.” He urged the Jamaican Diaspora to be vigilant that this doesn’t happen, and not be complacent because “You can’t assume another Martin Luther King will emerge.”

Golding perceives Jamaicans are a crucial component of America’s immigrant community, and when blame is cast on that community it’s also being cast on the Jamaican immigrant community. “This is not right because the Jamaican Diaspora is a hard-working, industrious, law abiding community. I have never seen Jamaicans pandering on the streets of Fort Lauderdale or Miami.” He said he is increasingly concerned with the deportations of immigrants, as mass deportations could cause a real crisis in the Caribbean, “especially n the area of employment.”

Urged to organize into a political force

He said while the Diaspora’s role in Jamaica s appreciated, “Jamaicans in the Diaspora must organize themselves more.” Drawing example of Cuban Americans who have organized themselves into a formidable political force, Golding said the Jamaican community in South Florida and New York is strong enough to organize themselves into a similar political force. “Jamaicans in the Diaspora must assert political authority” and be able to have such influence on their congressional representatives that they think careful of the consequences on voting on issues like immigration. He cited that chain migration through which families sponsor other family members to the US is under threat “and it is the system through which many Jamaicans  migrated to the US. Your Congressional representatives should hear that this is a bad idea.”

Golding also said political pressure should be brought by the  Diaspora against Congressional representatives to preserve Caribbean free trade with the US and the maintenance of trade waivers that facilitate trade with the US; and the review of policies that prevent correspondent banks in the Caribbean from closure.

In urging Jamaicans to become a formidable political force he said they must be more vigilant about registering to vote, and voting in American elections. ”More than ever your vote counts. Every vote counts.”