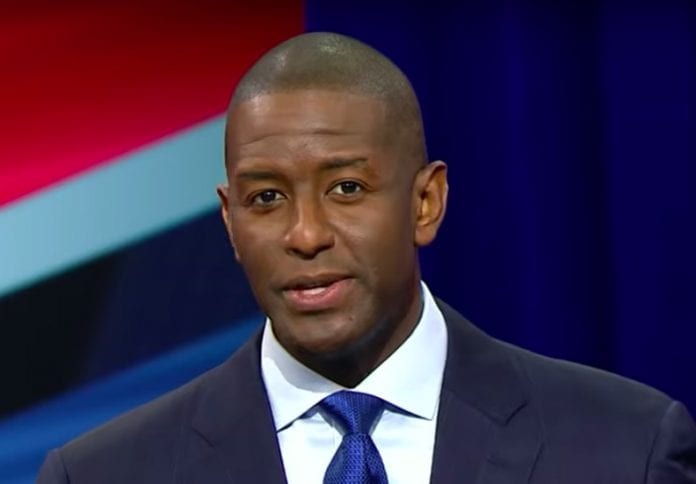 MIAMI, Florida – Andrew Gillum, 40, Former Tallahassee mayor, and Democratic candidate who came very close to being elected governor of Florida in 2018 was, according to a Miami Beach police report, found in a drunken state at the Mondrian South Beach Hotel on Friday morning.

According to the report Gillum, who in recent months was assigned to CNN as a political analyst, was discovered in a hotel room with bags of what appeared to be crystal meth in the company of two men. One of the men, Travis Dyson, appeared to have overdosed on drugs and was suspected of having a heart attack.

According to the police report, they were called to the hotel early on Friday morning to find paramedic treating Travis Dyson, a 30-year-old white registered nurse. for the apparent heart attack, Gillum and the other man was also in the room, and Gillum appeared to be intoxicated from having had too much to drink.

The police report indicated they found three plastic bags with a substance believed to be crystal meth on the bed and on the bedroom floor.

Gillum was not arrested, nor is any arrest anticipated, but the police indicated he was too intoxicated to answer questions.  He was later allowed to return to his home without incident.

In an interview with the Miami New Times, Dyson said he has been a friend of Gillum for some time.

On Friday afternoon Gillum issued a statement which read, “I was in Miami last night for a wedding celebration when first responders were called to assist one of my friends. While I had too much to drink, I want to be clear that I have never used methamphetamines,” he said. “I apologize to the people of Florida for the distraction this has caused our movement.

“I’m thankful to the incredible Miami Beach EMS team for their efforts.  I will spend the next few weeks with my family and appreciate privacy during this time.”

Gillum served as mayor of Tallahassee from 2014 to 2018/ He made a very impressive run to succeed Rick Scott as the Governor of Florida in 2018, losing by just 34,000 to Republican Ron DeSantis. Along appearing regularly on CNN as a political analyst, he has also been involved in a political organization driving the mass registration of voters to vote in the November 3 general elections.