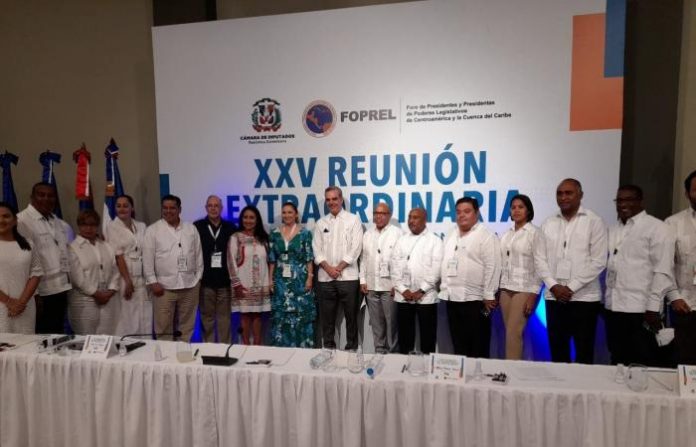 The Parliamentary Forum of Presidents of the Legislative Powers of Central America and the Caribbean Basin (FOPREL) is calling on the United States to include Haiti in the “Alliance for Central America” plan which aims to stop the “serious crisis” in the country.

FOPREL met in the Dominican Republic over the last weekend in an extraordinary meeting and the participants from Belize, Costa Rica, El Salvador, Guatemala, Honduras, Nicaragua, México, Panamá, Puerto Rico and the Dominican Republic, issued a resolution urging the United States to collaborate to face insecurity as well as education and health problems in Haiti.

In addition, during the Ibero-American Summit of Heads of State and Government of which Haiti has been an observer member since 2012, the Dominican Foreign Affairs Minister Roberto Álvarez urged his colleagues to once again launch a call to the international community for a dialogue on the crisis affecting Haiti, so that free and inclusive elections could be held.

Alvarez said that the Dominican proposal is to promote a dialogue that will lead to the holding of elections in Haiti.

Meanwhile, Prime Minister Ariel Henry, says he intends to work with the Provisional Electoral Council (CEP) when it is reconstituted and civil society organizations to lead an intense media campaign for the next elections.

Henry, who is also Minister of Communications, said the aim is to achieve a high turnout in the elections to elect the President, Parliamentarians and Municipal Councils, in addition to the referendum to adopt the new Constitution.

General elections were scheduled to have been held in Haiti on November 7 this year to elect the President and Parliament, alongside a constitutional referendum. However, they were postponed following the dismissal of the members of the CEP by Prime Minister Henry, who has indicated that the polls will be held in early 2022.

President Jovenel Moise, who was assassinated on July 7, had come to office in 2016 with a voter turnout of 21 percent.

But Prime Minister Henry said he is committed to developing a “dynamic and coherent” communication policy, based on traditional media, digital and social networks to inform the population of the achievements of his administration during the transition.