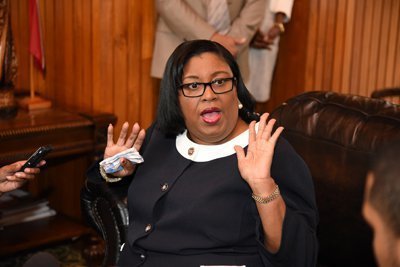 PORT OF SPAIN, Trinidad, CMC – Former public administration minister Marlene McDonald, who was unable to attend a magistrate’s court hearing on Monday because of illness, has been granted two million dollars bail after being charged with four other people on several charges of conspiracy to defraud the government.

Chief Magistrate Maria Busby Earl Caddle late Monday also set bail at TT$500, 000 for Michael Carew, 74, who is McDonald’s husband, one million dollars for Edgar Zephyrine, 75, the former head of the National Commission for Self Help,  TT$100, 000 for 66-year-old contractor Wayne Anthony and TT$400,000 for another contractor, Victor McEachrane, 65.

They are due to return to court on September 9.

The magistrate read a total of 49 charges with the offences ranging from conspiracy to defraud the government, and money laundering, dating back to several years ago when McDonald was part of a former People’s National Movement (PNM) administration.

McDonald, 61, who was sacked by Prime Minister Dr. Keith Rowley on Monday, faces seven charges, including two for conspiracy to defraud the state. She is also is charged with misbehavior in public office.

The allegations are that McDonald approved millions of dollars in funds for organizations linked to at least two of the accused and in addition all of the accused received the funds knowing or having reasonable grounds to the effect that it was criminal property and constituted criminal conduct in the form of conspiracy to defraud the government.

The 49 charges were laid indicatbly and the accused were not called upon to plead.

Director of Public Prosecutions, Roger Gaspard, while acknowledging the seriousness of the charges, did not object to bail

McDonald, who has been in police custody since last Thursday, has been hospitalized after her lawyer, Senior Counsel Pamela Elder, said she had been taken to the privately-owned St. Clair Medical Centre in the capital after complaining of feeling unwell.

“The reason given by the police officers was that they had not been able to process the other accused and therefore although she had been charged she was forced to remain in police custody.

‘And when one considers how long she has been in custody it is not surprising that she has ended up here this morning,” Elder told reporters.

“You should know that her medical condition is a private matter and you should respect her right to privacy,” Elder said. McDonald is said to be diabetic.