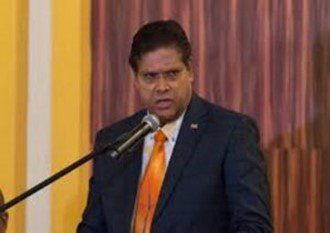 Two legislators in Suriname have filed a private members’ motion in the National Assembly aimed at declaring null and void, certain sections of the Criminal Code after indicating that age-old pieces of legislation are unconstitutional.

Ebu Jones and Tatiana Lösche, who are both members of National Democratic Party (NDP) have submitted the private member’s bill to parliament seeking to amend the Criminal Code after arguing that several articles are contrary to Article 19 of the Constitution of the Republic of Suriname, which guarantees the right to freedom of opinion and expression.

It also follows the recent arrest of three people, who had taken to social media to criticize President Chandrika Persad “Chan” Santokhi. The men have all been charged with insulting the head of state.

In the three cases, the authorities used Article 152 of the Criminal Code, which dates back to 1910 and was then used to protect the monarch of the Netherlands against insult, when Suriname was still a colony of that country.

Two of the arrested men, political activist Sibrano Pique and a farmer, have been provisionally released. The third man is still in custody.

While President Santokhi says has not filed a report against the persons concerned, the Public Prosecution Service has acted ex officio when a possible criminal offense has been identified.

But political observers say never before have so many people in Suriname been brought before the courts for insulting the President.

A few years ago, the Surinamese Association of Journalists (SAJ), with the support of the Association of Caribbean Media Workers (ACM), the Organization of American States (OAS), and the International Court of Justice (ICJ) initiated a process to have the offending legislation removed from the criminal code.

However, the initiative has not been completed. Sessions were then held with parliament and other groups in society. President Santokhi, who was then in the opposition, said he was in favor of abolishing the outdated legislation. Now, in his capacity as head of state, Santokhi has not moved to abolish the laws.

In their argument to remove the muzzles from the Criminal Code, Jones and Lösche said Suriname is a democratic country, based on the human ideal of equality, where the entire population is sovereign and where all authority is based on the consent of the people.

They said free speech is inherent in democracy. The right to freedom of expression is very important in a democratic country. It offers citizens the opportunity to criticize the government, absorb and disseminate information and participate in public debate.

They argue that freedom of opinion and expression are fundamental rights with both a personal and a social dimension and are therefore fundamental preconditions for the full development of persons in our free and democratic society.

They said this is the reason the constitutional authority has enshrined this right in Article 19 of the Constitution of the Republic of Suriname.