Former Prime Minister of Jamaica, Portia Simpson-Miller is excluding herself from the battle for the People’s National Party (PNP) presidency between Member of Parliament for Central Manchester, Peter Bunting and current party leader, Dr. Peter Phillips.

Simpson-Miller released a statement to the public after images that recently circulated on social media gave the impression that she was siding with Peter Bunting in his race for the presidency. One such photo came from Bunting himself, which he posted on his Instagram page along with a video that was captioned “Always a pleasure spending time with Mama P”.

Adding to the controversy

The subtle but strategic post only added fuel to the already lit political fire, as many PNP supporters were already under the impression that there was animosity between Simpson-Miller and Phillips after he unsuccessfully challenged her for PNP presidency twice. Phillips assumed leadership of the PNP, however, when Simpson-Miller stepped down after the 2016 election loss.

The statement from Mrs. Simpson-Miller read, “It has come to my attention that images of me are being circulated giving the impression that I have taken sides in the upcoming PNP leadership race. I have not and will not take a side. I ask that my name and image are not used in the campaign.

I encourage Comrades to campaign vigorously for their candidate always mindful that after the internal contest we must continue our preparation for general elections. Keep the campaign clean and respectful. My first loyalty and duty will always be to the People’s National Party.”

Bunting confirmed his bid for the presidency on June 9, and many PNP members have already taken sides. MPs Phillip Paulwell and Lisa Hanna have shown their continued support for Phillips, while Dr. Dayton Campbell, Michael Stewart and Mark Golding have sided with Bunting.

The decision as to who will be the next president of the party is likely to be made at the next PNP annual conference to be held in September. 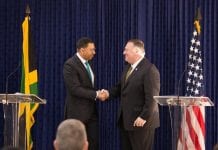