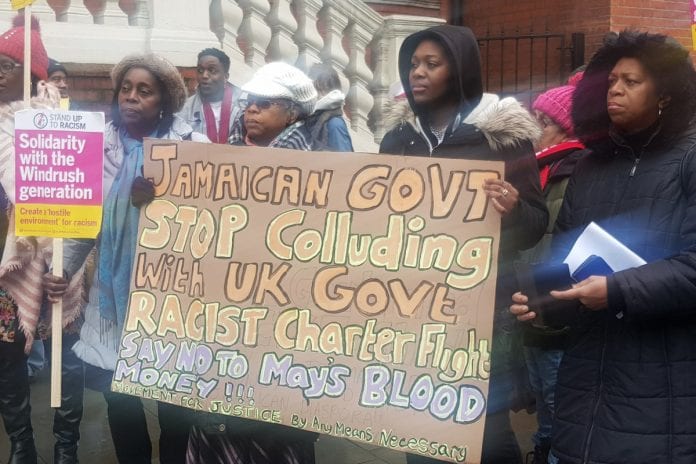 LONDON, England – A charter flight with deportees is scheduled to arrive in Jamaica on February 11, but contrary to concerns being expressed among members of the Jamaican community in England, the British High Commissioner to Jamaica, Asif Ahmad, said the deportees are not members of the Windrush generation.

The Windrush generation relates to immigrants who migrated to the UK in the 1950s after the end of World War II to meet labor shortages that were then being experienced in the country. Last year, serious controversy broke with indications that the UK government planned to deport some of these immigrants claiming that despite living in the nation for several years they were not British citizens. As a result of strong protests among the Caribbean and other communities, the government gave assurance the planned deportations would cease.

However, since then deportation to Jamaica and other Caribbean countries have continued.

Although Ahmad has confirmed the scheduled charter flight of deportees to Jamaica, he claims only individuals who served time for criminal offences in the United Kingdom are being deported, and it has nothing to do with members of the Windrush generation.

Ahmad told the Jamaican Observer, “I can say explicitly that Home Office ministers are poring over the names to make sure that there are no Windrush-eligible people. The people have rights to permanent settlement under the Windrush criteria, or due to their citizenship, no question whatsoever.

“And also, unlike in the past, the people who are going to be deported are not immigration offenders, they are all people who have served sentences in the UK beyond 12 months—that’s the criteria.”

He said if there are Jamaicans who are illegal immigrants in the UK who want to return home voluntarily, they would also be on the flight, but he was unable to give information of the number of deportees, as each immigrant “has a legal right, until the door of the aircraft is shut, to make a claim as to why they should not be on board.”

Addressing controversy over a report that a Jamaican man was been separated from his wife and young children to be deported to Jamaica on the February 11 flight, the British High Commissioner said the UK government has always followed the process of informing the Jamaican authorities, through the country’s high commissioner in London, of the deportation plans, and this will be done in this case.

The Member of Parliament representing the constituency where the Jamaican and his family lives, reportedly condemned the UK Home Office for the alleged plans to deport the Jamaican.

The MP said that it was wrong for the Home Office to be chartering deportation flights to Jamaica and other parts of the Caribbean before the delayed Windrush review has been published, adding: “How can the home secretary be sure she is not making the same mistakes?”