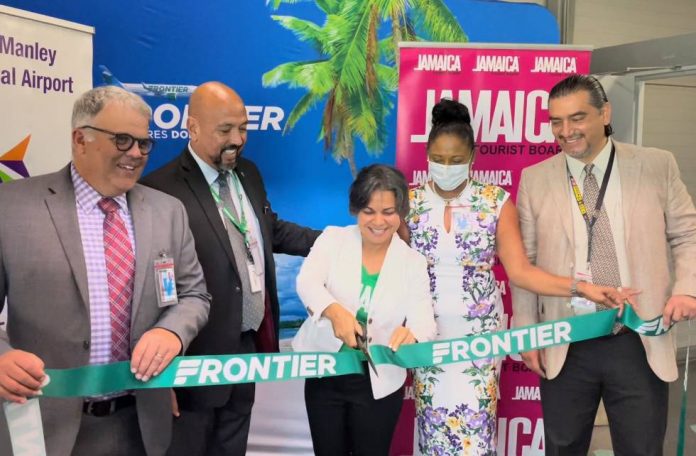 Another direct flight option has been added to the Miami-Kingston airline route. Frontier Airlines began its service between Miami and Kingston, Jamaica on Thursday, May 5. The inaugural flight landed at the Norman Manley International Airport at 8:30 a.m.

Passengers now have several additional options for flight selection as the airline expects to operate flights to the island’s capital three times weekly throughout the year. To mark the event, the airline offered one-way tickets from Miami to Kingston for as little as US$79.

Jamaica’s Minister of Tourism, Edmund Bartlett in an interview with a local newspaper celebrated the move, “Jamaica is very heartened by the decision made by Frontier to include flights to Kingston on their roster, well in advance of the summer vacation season. The flights will undoubtedly bolster Jamaica’s tourism industry by allowing us to welcome more of our visitors and members of the diaspora in Florida to the island,” he said.

Frontier airlines already provides service to the island’s second city, Montego-Bay. The airline made the decision to introduce the new Jamaica route after receiving requests for more flights to and from Kingston from underserved clients in the travel market. Senior Vice President of Commercial, Frontier Airlines, Daniel Schurz commenting on the move noted, “Kingston is home to an array of fascinating tourism and rich historical sites as well as providing easy access to Jamaica’s stunning mountains and beaches”.

International Sales Manager for Frontier Airlines, Alfredo Gonzalez also expressed his delight at the new service route, “We are thrilled to offer new service between Miami and Kingston for the first time. Jamaica is benefitting from our aggressive growth in the Caribbean as we aim to bring more visitors to this highly desirable vacation paradise and make it easy for island residents to travel to destinations in the U.S.,” he noted.