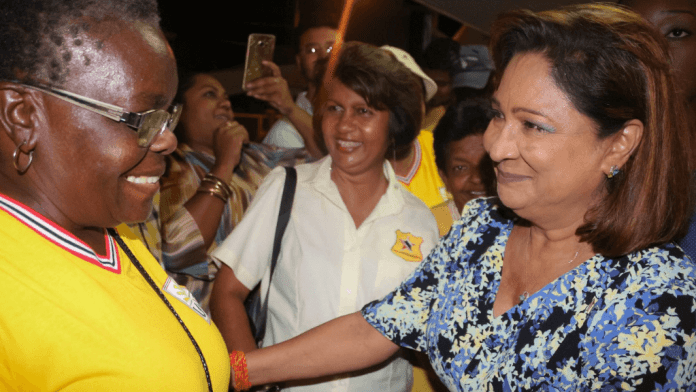 PORT OF SPAIN, Trinidad, CMC – Opposition Leader Kamla Persad Bissessar Monday described the government’s plan to offer a three-month tax amnesty as nothing short of a political gimmick as Trinidad and Tobago prepares to stage local and general elections within a one year period.

Delivering the Mid-Year Review for fiscal year 2019, Finance Minister Colm Imbert said the soon to be established Revenue Authority would need to “start with a clean slate” and as a result, the government is providing a “three-month tax amnesty in this year, starting in mid-June 2019 and extending to mid-September 2019.

“This amnesty will extend to all forms of taxation and appropriate legislation to give effect to this measure will be introduced in this House within the next few weeks.

“Taxpayers are urged to take advantage of this amnesty, file their outstanding returns, and pay their back taxes, because once the new Revenue Authority comes on stream, future amnesties are unlikely,” Imbert added.

But Persad Bissessar in her response, told Parliament that the government was seeking to buy votes ahead of the upcoming polls.

“The Minister comes here today with fatal elections in front of them, comes to announce game-changer. The one game–changer, listen, don’t pay taxes for three months, you getting a tax amnesty, as if that could make up for almost four years.

“So is the tax amnesty with respect to payment of taxes, don’t pay. I am asking, Honorable Minister, what is exactly the tax amnesty. Is it I am going to give you three months, I am not going to come after you for your taxes, I want the Minister to explain what he meant when he said a three-month tax amnesty”.

The Opposition leader said there was need for the clarification because “people in the country would want to know what you mean by a three-month tax amnesty”.

During her response, Persad Bissessar said the mid-year budget review came amid great expectations and like the four years of this administration “it delivered nothing.

“I came here today with expectation. Like most of the country, I wanted to hear what plans the government had to improve our situation. But what we heard was more deflection, more distraction more incompetence.

“The Minister completed his fourth midyear budget, and had all of 2016, 2017, and 2018 and half of 2019 to prove us wrong when we said they had no plan, but he had nothing to show once again,” she said, adding that her United National Congress (UNC) would unveil part of its economic recovery plan for the country.

She said that as the country gets closer to the end of the People’s national Movement (PNM) administration, “it has only become clearer to everyone that they do not know how to govern.

“What we saw today is a government that thinks the politics of the past can help them as we move closer to elections.

“That the Minister could stand here with his head held high and talk about turning around or whatever other alternate reality you have repeatedly tried create, shows clearly that they are delusional<’ she said, telling legislators that under the Keith Rowley administration “not only are more people unemployed, but more also feel less secure in their jobs.

the future, because we are all trying to survive today.”

She said that the economic collapse facing the country is the sole responsibility of the present government and that it would “continue to create any story and focus only on winning an election but what happens after they win? They have no idea how to govern.

She said the UNC, which formed part of the coalition people’s Partnership government that Persad Bissessar led between 2010-15, “remains focused on good governance and will hit the ground running when we return to office and put our economy back on a path of growth and sustainable development.

“Our National Economic Transformation Masterplan 2020-2025 lays out a wide-ranging suite of policy initiatives and programs which we will pursue to get our people working again and working towards a better future.

“Diversification is at the heart of our economic masterplan. We will encourage strategic investments in niche non-energy sectors where we have a strong competitive advantage, market opportunity and growth potential. These bold steps must be made now,” she said.

Persad Bissessar said that after almost four years in office the country is worse off under the present administration and that “the time has come for them to go, so that we can begin to rebuild and restore good governance to our nation”.