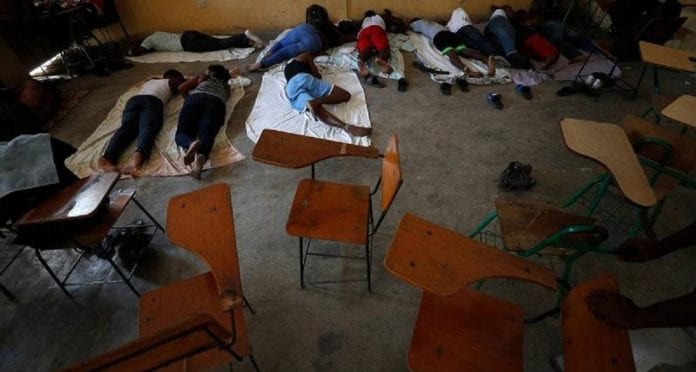 PORT AU PRINCE, Haiti, CMC – Students from the Faculty of Law and Economics of the State University of Haiti (UEH) are continuing their hunger strike to force President Jovenel Moise out of office, even as four of them opted out of the protest that entered its second week on Monday.

The remaining 11 students, including two women, have vowed to continue the hunger strike insisting that they are “clear in our demands.

“We chose not to eat until the President of the Republic hand over the key of the National Palace. We are ready to sacrifice our lives for the change of our country, we are in an unlimited strike, until the resignation of the President,” one of the students said.

The students have been posting handwritten messages on the walls where they are holed up at the university in Creole to express their demands.

During the day, the students spend their time lying on blankets or on a thin mattress, consuming only water and in some cases intravenous serum as had been provided last Thursday by the Red Cross..”

The actions by the students come as thousands of people took to the streets on Sunday for the second rally organized by a group of artists demanding that Moise, who came to power in 2017, demit office.

Moise has denied any wrongdoing and has named former prime minister Evans Paul to head a team that would hold discussions with all stakeholders to discuss a way forward.

Moise has urged Haitians to “identify their real enemies’ and again warned that the system which deprives the country of developing is alive and well in the country.

“The system has the capacity to regenerate each time. The people must be able to identify their real enemies,” he said last week, adding “this system that generates misery, poverty, exclusion, has come to an end and we must work together to prevent it from regenerating”.

But as they marched through the streets, one of the artists, the rapper, Zolan warned that ‘there will not always be a march on Sundays. We have other strategies to be announced soon”.

Police clashed with demonstrators who had used burning tires to erect roadblocks and attempted to burn down several businesses.

The authorities were also investigating the death of an unidentified man, whose body was discovered not far from the National Police of Haiti in Pétion-Ville, a suburb of the capital.

Police also had to use tear gas and rubber bullets during clashes with demonstrators in Pétion-ville and Delmas, where several vehicles were vandalized.

Media reports Monday said that a police inspector, identified as Jocelyn Jeantelus, who was assigned to the Carrefour police station, was shot in the head by unidentified individuals.