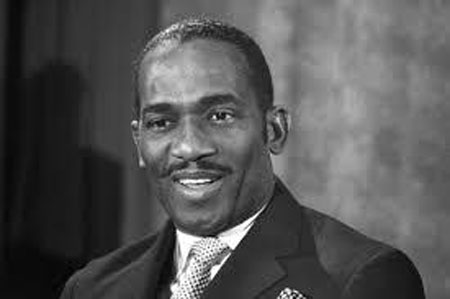 The Grenada government has re-named the island’s Botanical Gardens in honor of the country’s first prime minister, Sir Eric Gairy.

Sir Eric Matthew Gairy served as his country’s first Prime Minister from its independence in 1974 until he was overthrown in 1979.

Gairy was removed from office in the island’s first ever coup in 1979. The extremely charismatic leader was ousted by the left-wing New Jewel Movement (NJM), led by the late Maurice Bishop who became prime minister.

Exiled to the United States

A government statement issued in Grenada said that the Botanical Gardens has been renamed in honor of “Grenada’s Father of Independence and former Prime Minister” adding it is to be now known as “Sir Eric Matthew Gairy Botanical Gardens.” In addition, a monument has been erected at the entrance of the Gardens honor Gairy.

Earlier this year, the then Culture Minister, Brenda Hood, said that the Keith Mitchell government was considering the name change. Many government officials, former parliamentarians and relatives of “Uncle Gairy,” as he was affectionally known to many, reminisced on the former leader during an unveiling ceremony last weekend.

Prime Minister  Mitchel,  who Sir Eric once referred to as his political son, said the renaming of the gardens is fitting; as the former leader shaped Grenada. Mitchell challenged present day politicians to take a page from the former prime minister’s book.

“In my view, I think this is a fitting tribute, what we are doing here today to a man who has sacrificed a lot, and who came from the country side in those days without even having a formal education.”