Bolt has sent signals that his participation at the third running of the relays is unlikely.

“My coach hasn’t said anything about it, so I doubt that I will be competing there this year,” Bolt told the Jamaica Observer.

Meanwhile, Bolt said his preparations have been going well for this season when he is expected to hang up his spikes following the IAAF World Championships in London.

“Everything is going smooth, so the key thing is to stay injury free. I am just going to continue pushing myself and pushing my body and I hope it will work out,” he said.

Bolt is only scheduled to perform at the World Championships in London in August and the Racers Grand Prix on June 10 in Jamaica. The meet is expected to be his final appearance in Jamaica before retiring at the end of this season.

Bolt has only raced so far this year in relays and a 150 meters in Australia in February.

The IAAF World Relays started in 2014 and have taken place every year outside of Olympic years. 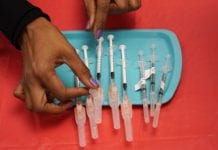