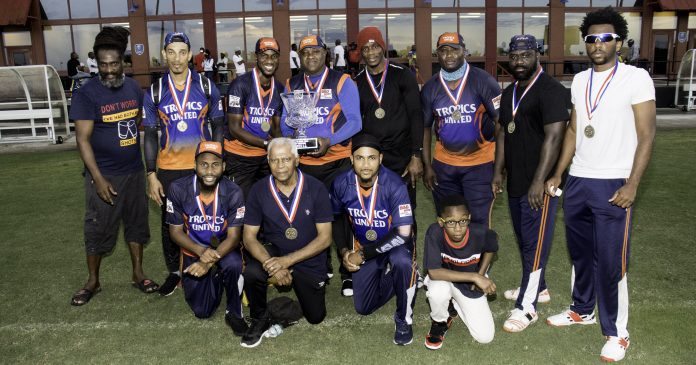 The match got off to a late staff due to rain but a magnificent effort from the ground staff that sponged-up the outfield, got play going at 1 pm, two hours after the schedule.

St. Lucie’s captain Elton Tucker Jr. won the toss and decided to field first on a damp outfield.  Tropics took advantage of the conditions and piled on 159 for 4 in the 17.5 overs, before rain interrupted play. The umpires then decided to call an end to the inning because of the late start and the weather.

Tropics’ opening pair of Philerm Davis and Ryan Watson put on 46 for the first wicket, before Davis departed for 15. Dale Africa joined Watson at the crease and the pair took the score to 83 for 2 when Shyram Negi clean-bowled Watson for 46 runs (4 fours, 3 sixes). Inform batsman Gavin Wallace and Africa continue to put runs on the board with a 33 runs partnership in 3.4 over. They took Tropics to 100 with 12.2 overs bowled.

Africa was next to go when Glen Anglin shattered his stumps for 31 (3fours, 1six). Wallace then went on a runs blitz, scoring 43 from just twenty-two balls. His inning included two elegant fours and four massive sixes. Bowling for St. Lucie, Shyram Negi took 2 for 32 from four overs and Charles Reid and Glen Anglin one wicket each for 29 and 30 respectively.

On Resumption after some fifty minutes rain delay, the overs were reduced from twenty (20) to seventeen (17), and a new target score of 164 to win.   St. Lucie was never in the contest from ball one, due to some tight bowling and good fielding by Tropics United.  St. Lucie lost their first wicket at 6 for 1 with Mark Pinnock making 2 runs.  Eleven runs later Richard Louis went for 2. With two wickets down and only 17 runs on the board, it was up to veteran batsmen Charles Reid and Rodney Husband to prop up the inning. Reid made 64 (6 fours, 3 sixes) and Husband added 40 (1 four, 3 sixes) in a 103 runs partnership.   Their effort was not enough however and after their allotted 17 overs they were 41 runs short of their target.

The main wicket takes for Tropics were final MVP Dale Africa 2 wickets for 22 runs from his 4 overs and Gavin Wallace 1 wicket for 8 runs from his only over.