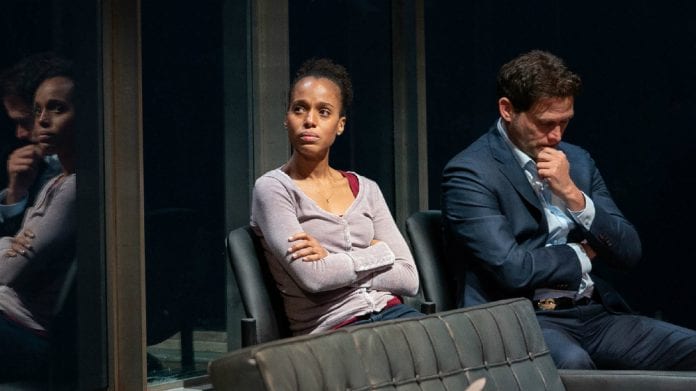 Set in Miami and based on the 2018 Broadway play and the recent NETFLIX film, both of which starred Kerry Washington (Scandal), AMERICAN SON is about an estranged interracial couple that must confront their feelings about race and bias after their son is detained by the local police following a traffic stop incident. Playing January 9 – 26, 2020 in the intimate Carnival Studio Theater (Ziff Ballet Opera House), AMERICAN SON continues Zoetic Stage’s 2019-2020 season and the Arsht Center’s 2019-2020 Theater Up Close Series.

Directed by Zoetic Stage Artistic Director Stuart Meltzer, AMERICAN SON is a gripping tale of two people caught in our national divide, with their worst fears hanging in the balance. Set in a South Florida police station in the middle of the night, this riveting new drama centers around an estranged interracial couple searching for their missing teenage son, who happens to be African American.

Fresh from its highly successful Broadway run, Zoetic Stage will be one of the first regional theaters to present this important new work about race in America. Intimate in nature but universal in scope, AMERICAN SON continues Zoetic Stage’s mission to present socially relevant work by South Florida voices.

Says Meltzer of the play, “American Son is a modern American thriller that truly reflects our times. The play speaks to all communities about the inequality many people face daily and the hope, humor and heartache surrounding it. It brings great joy that Chris’ play comes home to South Florida for all audiences to see it live on stage with an exemplary cast and designers.”