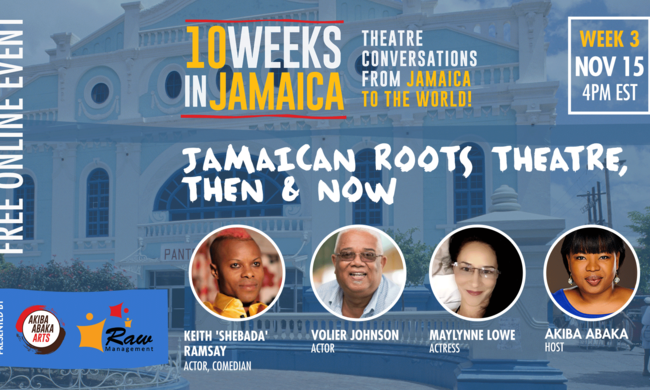 Lovers of Jamaican theater can enjoy lively discussions with Jamaica’s leading theatre artists exploring the histories and memories of, and future visions for, the Jamaican stage with a weekly series dubbed 10 Weeks in Jamaica: Theatre Conversations from Jamaica to the World!

“10 Weeks in Jamaica” weekly conversations can be streamed live  Sundays at 4  p.m. through January 3, 2021, on the Akiba Abaka Arts YouTube page.

The episode on Sunday, November 22 titled Dancehall Reggae and the Nettleford Effect, featured the sounds and movements of dancehall reggae music scores across the landscape of Jamaica’s cultural identity. Rooted in the Afro-Jamaican Kumina and Mento traditions, this form of popular music is among the country’s largest exports. The late Rex Nettleford, Jamaican scholar, choreographer, and co-founder of the National Dance Theatre Company of Jamaica, shared philosophies on the importance of contemporary Jamaican music and its linkage to pre-colonial African societies. Nettleford expressed these philosophies through dance theatre and rigorous support for the arts in academia, as well as in the shaping of Jamaica’s national identity.

That Sunday’s program brought together three beneficiaries of Nettleford’s legacy for a conversation on how Dancehall Reggae showed up on the Jamaican stage: Orville ”Xpressionz” Hall, artistic director for Theatre Xpressionz and chief judge for Jamaica’s number one dance program “Dancing Dynamite”; Marlon D. Simms, Dean of the School of Dance and Artistic Director for the National Dance Theatre Company of Jamaica; and Neila Ebanks dancer, choreographer and educator considered one of the Caribbean’s most innovative performing artists. The conversation was moderated by Jamaican-American theater entrepreneur, actress and director Akiba Abaka.

Future programs in the series include:

Queer Narratives from the Jamaican Stage

Leaders of a New Stage

Afro-futurism and the Jamaican Stage