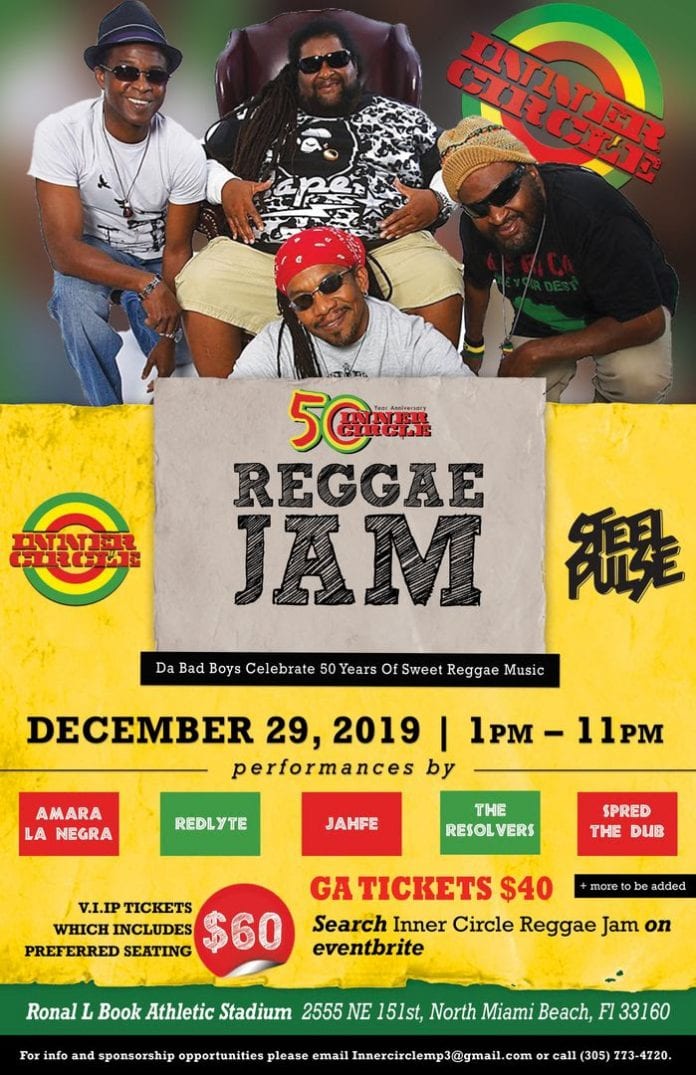 MIAMI, Florida – The Reggae Jam is back in full flight this December in Miami for its second year running.

This Reggae themed music festival, dubbed The Meeting of the Legends, looks to be an epic event showcasing some of the world’s most influential reggae artists.
Headlined by Grammy award-winning reggae band Steel Pulse, who formed over 45 years ago in Birmingham, England. Steel Pulse are critically acclaimed for their political take on music and were the first non-Jamaican band to receive a Grammy Award for Best Reggae Album.
Also headlining is Grammy award-winning reggae band Inner Circle, world-renowned for the Bad Boys movie theme song. Inner Circle brothers Roger and Ian Lewis were recently awarded the Order of Distinction in this year’s National Honours and Awards in Jamaica. The band are celebrating over 50 years of playing reggae music together and are a token of love and longevity within the industry.
Amara La Negra, star from the hit TV series ‘Love and Hip Hop: Miami’ will perform live. Amara is immensely popular because of her strong statements and pride in her race. She uses this positive energy in her music and to promote her brand over social media to her 2.5 million followers.
Other artists in this year’s line-up included Redlyte, Jahfe, the Resolvers, Spread the Dub and many more to be announced.
The Reggae Jam will offer VIP tickets with preferred seating around the stage for $60, while general admission tickets are $40. There will be a variety of food and drinks available at Reggae Jam.
Reggae Jam is a family-friendly reggae music festival starring a number of the world’s biggest reggae stars. Reggae music has always inspired positivity and love throughout the community, so we expect this to be one of North Miami’s most memorable events of 2019.
Details are as follows:
Sunday, December 29, 2019.
Doors open at 1pm. Doors close at 11pm.
Ronald L Book Athletic Stadium
2555 NE 151st, North Miami Beach, FL 33160