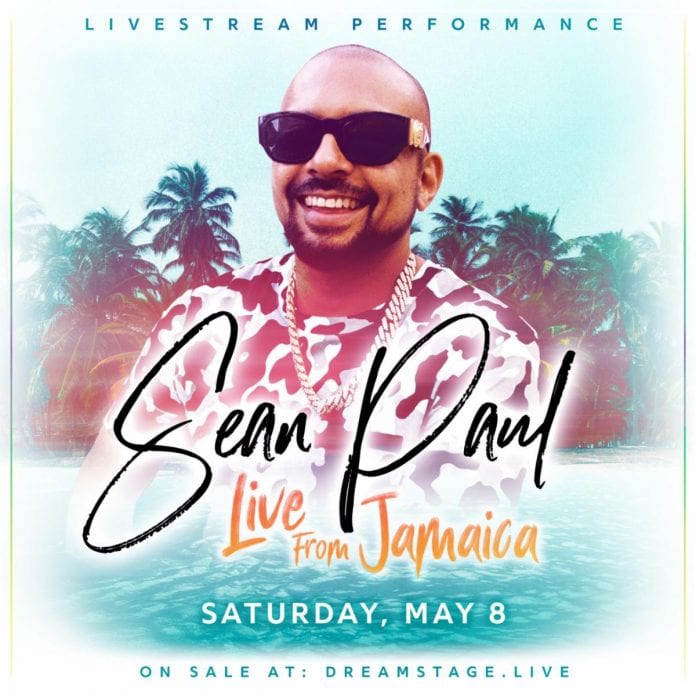 Multi award-winning recording artist Sean Paul is thrilled to welcome back his fans for his first performance in over a year, Live from Jamaica come May 8th.

Hosted on Dreamstage’s virtual platform, Sean Paul is eager to whisk fans away to the blue water of Jamaica for a one-of-a-kind performance of his classic hits and music from his latest album “Live N Livin”, released on March 12.

Open to all fans around the world, the Live from Jamaica will commence at 4 PM EST, and feature surprise musical guests’ fans will not want to miss.

Fans will teleport to the Caribbean for feel-good music through Dreamstage’s superior hi-def visual virtual concert stage that brings dancehall ambassador Sean Paul and surprise musical guests into homes where fans can dance like no one’s watching in unison with others. For the past 20 years, fans have been inviting Sean Paul and his team to their various homes all over the world, on Saturday, May 8th Sean gets the chance to welcome everyone to his home, Jamaica.

Against the backdrop of turquoise waters, expect music by his live band and DJ as he jams to a mix of his classics as well as singles off his recently released album, Live N Livin, with special guests.

“This last week in rehearsal has been a great feeling to see, vibe, and rehearse with my complete band and dancers. Truly miss performing for my fans and I look forward to this Saturday. For the first time I get to invite everyone to my home, my beautiful island of Jamaica and enjoy with me and a few friends some good dancehall music” says Sean Paul. Performing for the first time tracks off his recently released album ‘Live N Livin’ concert viewers are in for a surprise. ‘Live N Livin’ is the first of Sean Paul’s two planned albums for 2021, which includes 16 tracks featuring 21 of the biggest names in reggae and dancehall including greats like Buju Banton, Damian ‘Jr Gong’ Marley, Busy Signal, Mavado and the younger generation of artists Chi Ching Ching, Intence, Skillibeng, Masicka and Govana. With such a star-studded album Sean is guaranteeing a few surprised guest artists to appear on stage as well.

For more info and to purchase tickets, please visit: www.dreamstage.live. Tickets retail for $19.99 for a single ticket until performance day. Commemorative poster and ticket bundle will be available online as well.