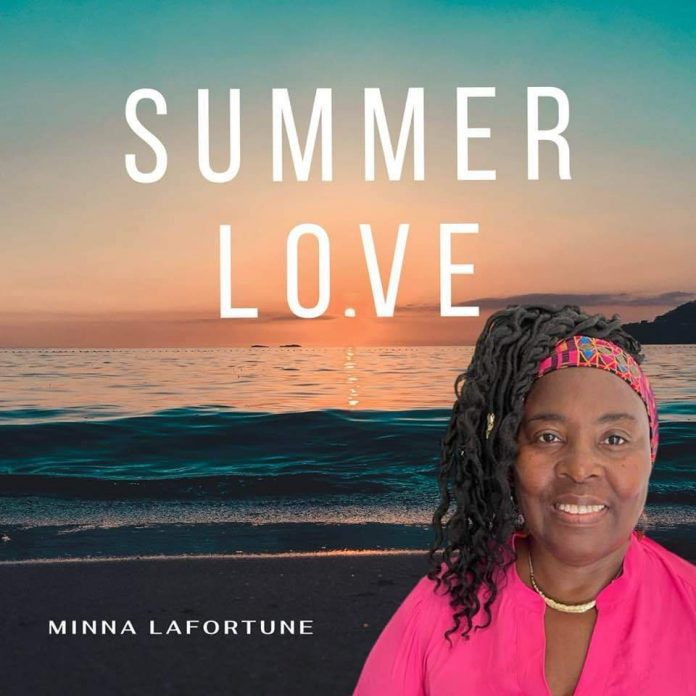 “Summer Love” was written by Minna and is arranged using genres of reggae and Hip-hop. It describes a romantic relationship that occurred during a summer season that fizzled, leaving her lamenting.

Minna LaFortune, although a life-long singer/songwriter/poet, is a new recording artiste. When asked about her music bio, she responds that “My musical journey started with my mother. She always sang to my brother and me. She was also a folklorist. Before we had television, she entertained our extended family with duppy (ghost) stories and songs. She died when I was 12 years old, and my brother, 14.

From an early age, I wanted to be a singer. I wanted to sing opera and jazz. My life-long dream has been to sing at the Jamaican Jazz and Blues Festival.” Minna has experience in singing styles ranging from classical, to jazz, ballad, folk, and now, Reggae!

Minna studied voice at Ardenne High School, where she sang in the school choir. As a result of her classical training, she won a soprano soloist bronze medal for her school at the annual Jamaica National Music Competition. Minna also sang in the church choir at Lyndhurst United Methodist Church, later joining the Methodist Choral, and then the Diocesan Festival Choir, directed by Dr. Hazel Lawson-Street.

Migrating to the USA in 1986, she joined Vanderveer Park United Methodist congregation in Brooklyn, NY, where she sang in the choir. While at Vanderveer UMC, in 1992, Minna founded and directed the African Caribbean American Singers (Afro-Carib-A Singers), collaborating with musicians such as Teddy Crawford, Molendyno Gayle Moxey, Oscar Stephenson, Raymond Trap and Jeffery Fairweather, as well as E. Wayne McDonald, Director, Caribbean Cultural Theater, and Actress/Storyteller, Marcha Tracey.

In addition to producing several performances at Vanderveer United Methodist Church and around the tri-state area, Minna also managed entertainment and fundraising activities, while also performing as a soloist at various other functions.

Minna Lafortune is also a playwright, mentor, trained chef, and arts and craft enthusiast. She is also the co-founder and president of the non-profit organization, Society for the Advancement of the Caribbean Diaspora (SACD)

The album is produced and arranged by Lee Holness from The Art of Music Online Media Studio Photographer: Frank LaFortune (husband).