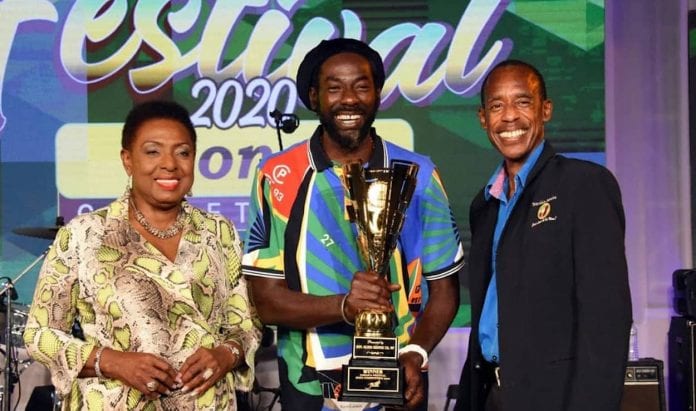 Reggae and Dancehall entertainer Buju Banton has earned the title of “Mr. Festival” after winning the 2020 Festival Song Competition, with his song entry “I Am A Jamaican”.

The win, which was announced on Sunday night, comes as no surprise to Jamaicans. Banton’s entry was the resounding favourite from a star-studded group of finalists which included past festival winner Toots and the Maytals, Freddie McGregor, LUST, Shuga; two-time Festival Song winner Nazzle Man, Xtra Bigg, and Radix OD.

Papa Michigan placed second with his entry ‘Jamaica Dance’, while the actress and television presenter, Sakina Deer, placed third with ‘We are Jamaica’

In his acceptance speech, Banton announced that the 3-million dollar cash prize he received would be donated to the Sunbeam Boys Home, a children’s home in St. Catherine. He now joins an elite list of Jamaican entertainers like Toots and the Maytals, Eric Donaldson, Hopeton Lewis, Roy Rayon, Tinga Stewart and Nazzleman, whose music have and will continue to be the backdrop of Jamaica’s annual Independence celebrations.

Buju Banton has had a long walk to becoming Mr. Festival. Upon returning home to Jamaica after severing seven years in United States federal prison, many Jamaicans were anxious to see if the deejay could return to his former glory.

Prior to his prison stint, Banton had built a solid career which earned him the reputation of one of Jamaica’s most legendary entertainers.

The 47-year-old deejay, whose real name is Mark Myrie, first came to prominence in the 1990s, as a youngster signed to Donovan Germain’s famous Penthouse Records label. He had early success with hits like “Bogle” and “Love me Browning” in 1992. That same year, he released “Mr. Mention”, his breakout project which featured other hits like “Bonafide Love” featuring Wayne Wonder and “Who Say” with Beres Hammond. 1992 also saw the unsanctioned re-release of “Boom Bye Bye,” a controversial song recorded several years earlier when the artist was 19 years old, that would later come back to threaten his career. That year, Buju broke Bob Marley’s record for the greatest number of #1 singles in a year.

Three years later in 1995, Buju Banton released ‘Til Shiloh, still regarded as one of his most influential projects ever. The album deviated from the hardcore dancehall that fans had come to expect from the deejay, and presented a much more spiritual and conscious Buju Banton.

Buju continued to grow his fanbase with a string of successful albums and major hits over the years, like “Driver A”, “Wanna Be Loved” and “Too Bad”.

But in 2009, Banton was arrested in Miami and charged with conspiracy to distribute and possession of cocaine. The first trial, in September 2010, was declared as a mistrial after the jury was unable to reach a unanimous decision.

Just one day before the start of the second trial, Buju Banton won Best Reggae Album at the 53rd annual Grammy Awards for his 2010 album, ‘Before the Dawn’. The high was, however, shortlived. Just two week after the win, he was found guilty of the drug and additional gun charges; and sentenced to 10 years in prison. The gun charges were later dropped and he was released in December 2018.

Fast-forward to March 2019, Buju Banton had the world watching anxiously, as he started The Long Walk To Freedom tour and performed his first concert at National Stadium in Kingston. The concert attracted over well 30,000 people, including international fans who flew to Jamaica to witness his first performance in eight years. It was the largest concert in Jamaica since Bob Marley’s Smile Jamaica concert in 1976 (many argued that Buju’s concert was bigger) and gained international coverage from worldwide media. That same month, Buju Banton and his team officially removed “Boom Bye Bye” from his catalog after receiving backlash. Banton apologized for the song’s harmful lyrics and announced his intention to never perform the song again.

Following the Long Walk To Freedom Tour, Buju released a string of singles under a new partnership with Jay-Z’s Roc Nation music label. Buju Banton is the second Jamaican reggae artist to be represented by Roc Nation, following Damian Marley.

Banton released his 13th studio album and his first in a decade, Upside Down 2020 in June 2020. The album includes guest appearances from John Legend, Pharrell, Stefflon Don and Stephen Marley. The album landed at Number 2 on the Billboard Reggae Albums Chart, officially marking a successful comeback unto the music scene.