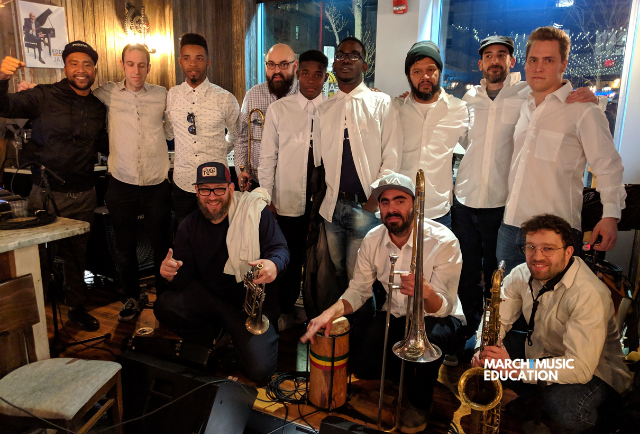 The Alpha Institute in Kingston, Jamaica hosted three members of Kings Highway, a Boston, MA-based Caribbean Jazz outfit, during the first half of the exchange in February. Later in March, Alpha Institute music students Patrick Garrell and Rohan Mitchell, along with senior music instructor, Clayon Samuels, traveled to the USA for an extraordinary week of high school, college and university music classes, performances, concerts and networking. Organized by March for Music Education founding partner Kings Highway, the visit to the USA created a dynamic platform for music educators and students on both sides of the border to explore, compare and develop their craft.

“The experience helped me to find a different side of me I didn’t know about musically,” said Alpha Institute’s Mr Samuels. “I learned there is no limit to learning. The March for Music Education experience inspired me and encouraged me to learn about what more that I can do at Alpha and with music in general.”

The visitors from Jamaica spent their first full day at Berklee College, the largest independent college of contemporary music in the world. Berklee alumni have won 294 Grammy Awards, 95 Latin Grammy Awards, 19 Emmy Awards, 5 Tony Awards and 5 Academy Awards. The team from the Alpha Institute attended classes in jazz theory and Pro Tools and a performance class focused on Red Hot Chili Peppers. They also tried augmented reality for the first time and presented a songwriting project that earned cheers from Berklee students and plaudits from Berklee Professor Sarah Brindell.

Alpha’s senior music instructor, Clayon Samuels, was equally impacted. “I was inspired by the way Sarah led her class. This class changed my whole outlook on creativity and song writing. It was magical because oftentimes the boys at the Alpha Institute complain about English class not knowing that they will need the writing skills one day to execute a good song idea.”

The following day, at Canton High School, Jamaican music was the main topic at three performance classes — orchestra, concert band and jazz ensemble. In each class of over 40 students, Canton musicians performed their traditional repertoire and also ska music. Alpha students and their instructor discussed with Canton students the roots of ska and its links to American jazz. At the end of the day, a massive jam session gave everyone the opportunity to apply what they had learned — and they learned more than just music.

Canton’s Director of Music Ensembles, and King’s Highway trombone player, Brian Thomas, said, “Canton students learned some of the technical aspects of playing Jamaican music and how Jamaican music was influenced by the major cultural and historical event of Jamaica gaining independence.”

“The experience at Canton allowed me to use the tools I learned in college,” Mr Samuels said, “to teach others about Jamaican culture and in the process helped to bring out another side of me that I did not know fully.”

“The day will go down as one of my most memorable days as a teacher,” Mr Thomas recalled. “I enjoyed watching the power of music show itself as my students in Canton instantly connected with Clayon, Patrck and Rohan. While I’ve had the opportunity to regularly experience that through my own musical opportunities, it was amazing to see my students have the same experience.”

Of course, any trip to the United States is not complete without a concert featuring a recent Grammy winning artist. March for Music Education Exchange resident musician, Professor Mark Berney, of the University of Rhode Island (URI), and Kings Highway trumpet player, made sure the team from Alpha didn’t just watch 2020 Grammy winning trumpet player Brian Lynch. Indeed, during the visit to URI, Alpha was also treated to a Brian Lynch masterclass with URI students. Professor Berney noted how the learning went both ways.

Performance is a critical part of music education particularly for vocational students like those at Alpha. Accordingly, the visit to the USA started and ended with performances. The first performance, held at La Fabrica, a small venue on Massachusetts Avenue, put Alpha in front of local ska and reggae music fans for the first time. The appeal of ska caught Mr Samuels’ attention.

“The idea that musicians outside of Jamaica would take Jamaican culture,” said Samuels, “and immerse it into their own and the whole love for it was a surprise to me.” 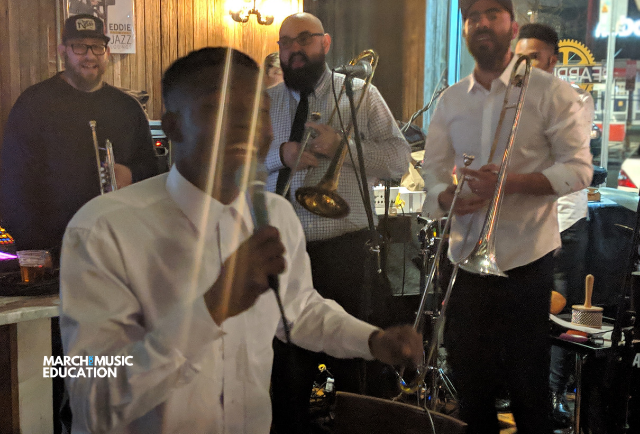 The final performance brought together a host of personalities from the past three days. Held at The Beehive, a hip hub for hundreds of live music fans in Boston, the Kings Highway/Alpha connection brought out Chris Wilson from Heartbeat Records, Shema McGregor, daughter of Freddie McGregor who is now working with the Wailers and Canton High School students who turned out to support their friends. Berklee Professor Sarah Brindell took the stage as did Dion Knibb, son of Skatalites founder Lloyd Knibb. At The Beehive, the musicians made the night their own.

“King’s Highway and Alpha joined to become one,” said March for Music Education Exchange resident musician and Kings Highway drummer Nathan Sabanayagam. “With a solid three days of school visits and music under our belts, this show was a celebration and culmination of the entire cultural exchange.”

“The last night at Beehive was special,” recalled Alpha student Rohan Mitchell. “The whole energy. The whole of the guys coming together. The whole love and the respect that we share for each other. It helped boost the performance.”

The end of the exchange marked the beginning of new opportunities, new projects and a new mindset, one that is sure to help Alpha students and their instructor weather the challenges brought by travel restrictions and social distancing. 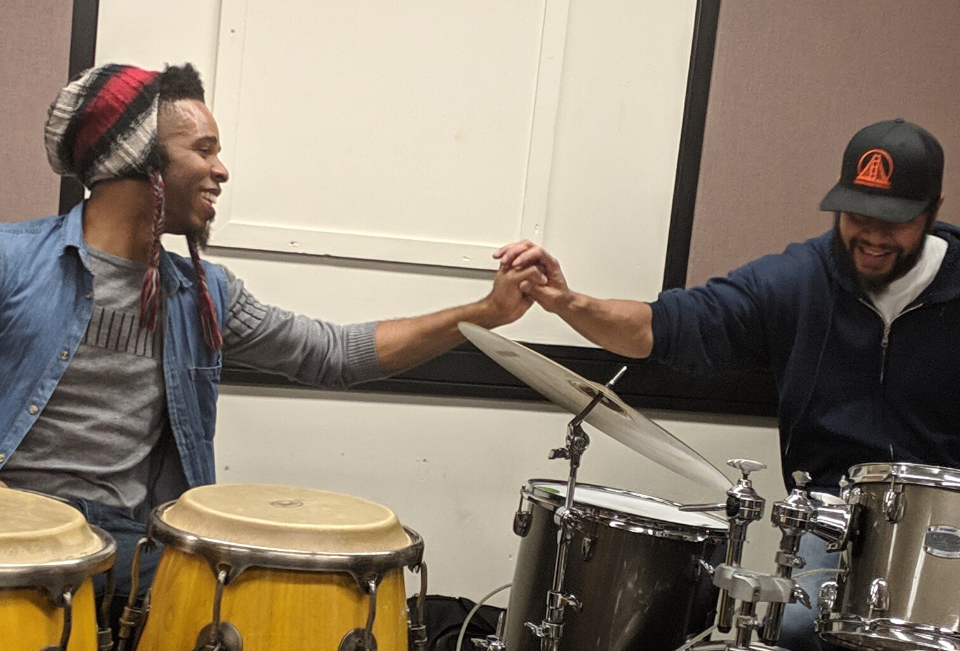 “We wanted to create a personal experience that would allow for musicians and educators to learn and grow, both in their craft and personally,” said MMEX organizer and Kings Highway band leader, Alex Beram. “We saw Patrick, Rohan and Clayon engaged from the first moment; curious, active, excited, challenged. They met other music students and educators from all over the world, not only creating lasting bonds and friendships, but quickly assessed their own strengths and weaknesses in light of that.”

The mission was not lost on Patrick or Rohan.

“I want more Alpha students to experience what I did because it helped me put things into perspective. And it can help others,” said Patrick Garrell.

Rohan Mitchel added, “The March for Music Education Exchange experience told me to get up and not to get lazy or complacent. I believe that this opportunity should be provided to every musician who wants to take their career to another level.”

The March for Music Education is looking forward to creating more opportunities for music students and educators in and outside of Jamaica.