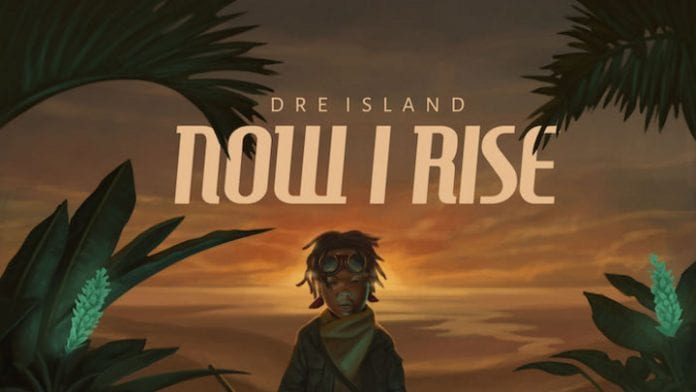 With the apt, poignant lyrics, “Through it all, we survive, Yet still hold the faith” in his hit single, “We Pray,” featuring Popcaan, multi-talented musician, Dre Island is a voice we can all stand to hear from now. The singer, deejay, songwriter, producer and pianist, recently released his debut album, Now I Rise.

The album features “We Pray” along with collaborations with Jesse Royal and Chronixx. Now I Rise was released as a joint venture between Dre Island Music and the Kingston Hills Entertainment label, in partnership with New York-based DubShot Records.

Themes of equal rights and justice, rebellion, love, faith, change, and comfort in the face of struggle abound in the interconnected songs on the 13-track album. Armed with life’s struggles and successes, tribulations, and victories, Dre Island’s musical journey is ready to be shared and leave its own legacy in the history of reggae music.

Despite heavily embracing the spirit of reggae and Rastafari, Dre Island tries to remain genre-agnostic, exploring his creativity and not allowing his art to be contained nor confined.

Through a steady stream of hit singles, Dre Island has captured the attention of fans from around the world who are drawn to his inescapable authenticity and stone-cherished voice. His superb musicianship and strong vocals have been shaking sound system speakers for many years now, and growing anticipation has paved the way for his debut album. For the past 5 years, Dre Island has built an organic following amongst reggae fans and his contemporaries.

Once introduced to the studio, a young Dre observed keenly the ins and outs of every facet of the recording process, while developing a talent for production using his classical piano training. His professional journey working as a producer in some of Jamaica’s top recording studios led Dre to successfully complete projects and gain notoriety.

With the experience garnered as a producer and unwavering support from family and friends, Dre Island made the transition to a recording artist, releasing his first single “Reggae Love,” in 2013. His first big performance took place around the same time at Rebel Salute, one of Jamaica’s largest music festivals, known for its focus on roots and conscious music. The local buzz, fueled by live acoustic performances posted on YouTube, garnered an international fan base that demanded more from the young artist. It wasn’t until several years later that Dre penned his first bonafide hit song “We Pray,” which has over 27 million views to date on Youtube. In 2018 he headlined Reggae Sumfest, the island’s largest international stage show.

Dre Island, born Andre Johnson May 2, 1988, hails from the Red Hills Road section of Kingston, known to be a rougher part of town where gunshots and crime are in abundance.

At the tender age of three, his father asked him what he wanted to do when he grows up, his answer was one word “Piano!” His grandmother nurtured his interest in music and encouraged him by bringing him to church to sing in the choir and take piano lessons.

By age 12, he was already adopting a rebellious spirit, sneaking out of the house at night to attend local stage shows. By the time he attended the elite Calabar High School, he started taking his craft more seriously.

His artist name Dre Island came when a friend of his used to refer to him in that way, as he says, “I researched the term and discovered that apart from the meaning we all know, a mass of land surrounded by water, there is another definition ‘an isolated place where you go to find yourself’ and in that perspective, it became a spiritual term to I and I: the place where Dre goes to be alone with Jah.”