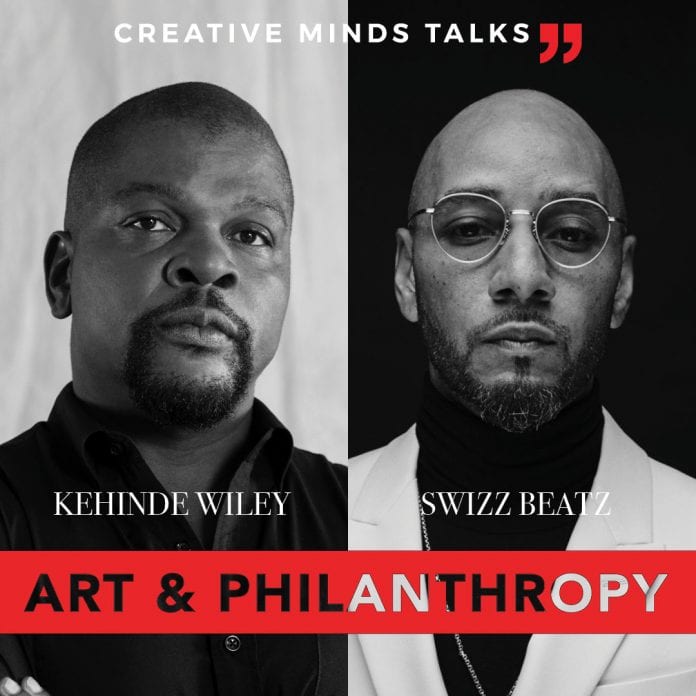 MIAMI, Florida – On December 2, Creative Minds Talks will bring world-famous artist Kehinde Wiley and highly-acclaimed, industry titan Kasseem Dean (a.k.a Swizz Beatz), to Miami’s New World Center during Miami Art Week for a dynamic discussion about the state of activism, philanthropy and how to make it in today’s world as a creative.

Known for juxtaposing power pairs on grand stages, Creative Minds Talks is poised to offer a captivating experience for its most iconic installment yet.

Kehinde Wiley – considered to be one of the most eloquent artists of this era – is joining us for his first public conversation after the historic unveiling of his “Rumors of War” sculpture, currently turning heads in Times Square.  Internationally lauded for his official portrait of President Barack Obama, Wiley has firmly situated himself within art history’s tradition of portraiture. Earlier this year, Wiley launched his new artist in residence program, Black Rock Senegal, with Dean’s active involvement on the committee selecting the first year of artists. Now, the two friends reunite for an intimate and engaging conversation, creating a landmark moment in Art Basel history.

“Black Rock is about West Africa and it is about the world.  The West African story is all of our stories: it is about aspiration, community, and tradition,” says Kehinde Wiley. “I founded Black Rock because I wanted to invite unique thinkers from across the world to join me in Dakar and become a part of this creative evolution. Art, in any form, is about dialogue. I am proud that Black Rock is doing the work to inform a new global discourse about what Africa means today.”

Kasseem Dean is an American hip-hop recording artist, DJ, record producer, art collector and entrepreneur whose name reigns in the cultural world at large. Through The Dean Collection, Dean and his wife Alicia Keys, have contributed to and been inspired by a far-reaching community of global contemporary artists. Bringing his insight as a New York visionary to the Magic City, guests who purchase one of Creative Minds Talks limited-quantity tickets can look forward to a compelling conversation between creatives, red carpet entry, champagne reception and a VIP rooftop afterparty.

“Creatives hold the keys to the culture. We are a community constantly inspiring and challenging each other to do more,” says Swizz Beatz. “Kehinde is an artist that I have always admired who pushes beyond the limit of what is possible. It is my pleasure to be on stage with him and my hope is that our conversation will inspire the next generation of creatives.”