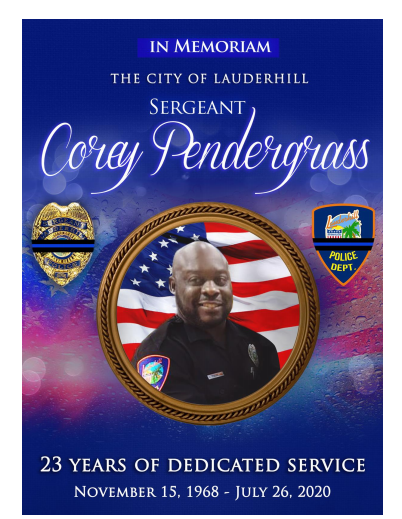 The Lauderhill Police Department posthumously promoted Officer Corey Pendergrass, one of their fellow officers who died after a battle with the coronavirus, to the rank of Sergeant.

On Sunday, the agency announced that Pendergrass had died from complications related to COVID-19. He served on the force since 1997.

First responders, earlier this week, escorted Pendergrass’ body from Plantation General Hospital to a funeral home in Pompano Beach. A private funeral is to take place next weekend to honor the officer.

As Police Officers, we understand and have accepted the inherent risk that comes with the profession of our choice. In that same vein, knowing that risk, does not lessen the pain of losing one of our own.

We suffered a great loss when Corey Pendergrass was taken from us on July 26, 2020. Not only was Corey a great person, a community leader, a friend and officer; he was an incredible Husband and Father.

On July 30, 2020, Police Chief Constance Stanley announced that Corey Pendergrass was posthumously promoted by the City to the rank of Sergeant. We thank him for his 23 years of dedicated service to the law enforcement profession and the entire Lauderhill family.

Corey’s life and legacy will be honored by many in the upcoming weeks. However, due to these unprecedented times, The Pendergrass Family has elected to honor Corey with private family services on August 7th and 8th 2020.

The Lauderhill Police Department will honor Corey’s life and legacy in the near future with a celebration of Life Ceremony. Information for that celebration will be forthcoming.

We sincerely thank everyone for all your support and look forward to healing as a City, Department, Community, and Family.