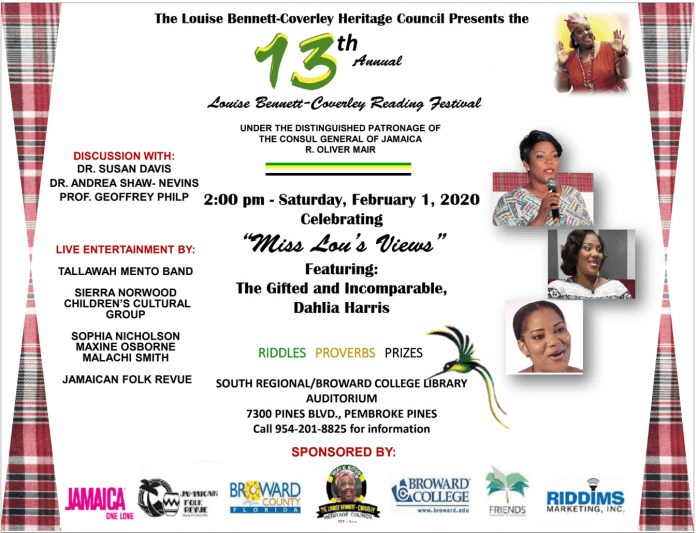 Under the patronage of Jamaica’s Consul General, Oliver Mair, the event will feature one of Jamaica’s cultural icon and accomplished actress, Ms. Dahlia Harris, who will share perspectives of the works and legacy of the late Hon. Louise Bennett Coverley “Miss Lou” OJ, MBE. (1919-2006), Jamaica’s internationally-famed cultural ambassador. The Literary Festival is free to the public, and is titled “Miss Lou’s Views” and continues the celebration of Miss Lou’s Centenary (100th) Birthday.

Now a staple on the Library’s annual calendar of activities celebrating Black History Month, the Festival will continue its tradition serving as a platform for conversations with other cultural artistes and literary folks, whose readings were inspired by Miss Lou, the rich Jamaican cultural heritage, and their folkloric and life experiences. These include Dr. Susan Davis (affectionately known as Dr. Sue),; former Miami Dade College Professor and author, Geoffrey Philp; and Dr. Andrea Shaw-Nevins, creative writer and a scholar of Caribbean and African Diaspora Studies, Nova Southeastern University.

The event will also feature entertainment from a selection of notable Jamaican artists from the South Florida Diasporic community including the Jamaica Folk Revue, Tallawah Mento Band Sierra Norwood Children’s Cultural Group, dub poet Malachi Smith, cultural performers, Sophia Nicholson and Maxine “Queenie” Osborne, some of whom had worked with Miss Lou during her long and expansive career.

Described as a leading light in the Jamaican theatre and production circuit, Ms. Harris is a well-known media practitioner spanning 25 years, in radio, television and print, and is currently the CEO of DMH Productions Limited. She has steadily made her mark as a writer, actress, producer and director mounting several award-winning and critically acclaimed theatrical and television productions. Among them is Jamaica’s number one television drama, Ring Games. Dahlia is a multiple nominee and winner of Jamaica’s Actor Boy Awards. Her work in theater has earned her a place in the Caribbean Hall of Fame, a recipient of the Bigga High Achievers Award, as well as the Flair Magazine Distinguished Woman Award. She also holds the distinction of being one of Jamaica’s best female stand-up comediennes; and is the convenor of the annual Women in Theatre Festival.

The annual Reading Festival was started in 2007 by Mrs. Norma Darby, former Executive Director of the Jamaica Folk Revue, following the death of Miss Lou in 2006. Proceeds from sales of Miss Lou’s works – books, CDs, and other memorabilia will continue to support of the Louise Bennett Coverley Scholarship tenable at the Edna Manley College of Visual and Performing Arts, Kingston, and the Broward College in South Florida. The scholarship was named, posthumously, in honor of Jamaica’s cultural ambassador and is awarded to a student at the college pursuing studies in the performing arts.

The annual Festival is supported by the Louise Bennett Heritage Council, the South Regional Broward Library, the Friends of the Library, and the Broward College in collaboration with several local Jamaican-owned companies and associates including the Jamaica Tourist Board, and Riddims Marketing.