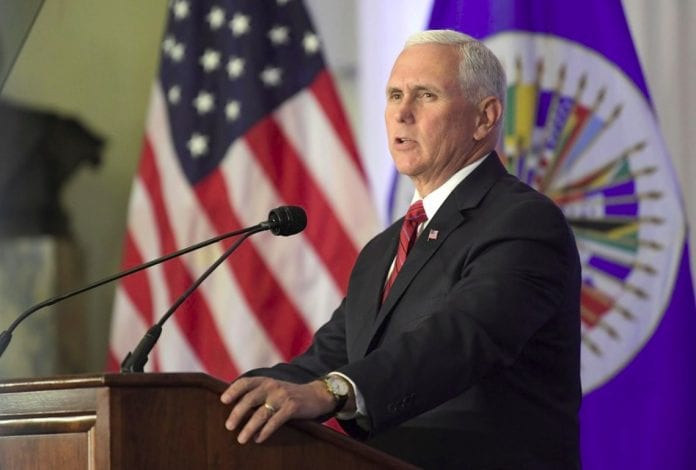 United States Vice President Michael Pence has referenced Jamaica’s economic reform for praise, among others in the Americas he hailed for their positive approach to growth. “Let me thank the many countries that have demonstrated courage to pursue economic reforms to empower job creation, innovators and citizens alike, from Argentina to Jamaica.”

Vice President Pence who was addressing a protocolary meeting at the Organization of American States headquarters in Washington, D.C., on Monday, said he and President Donald J. Trump welcomed the bold action taken by these countries. “And we look forward to expanding our ties of commerce and exchanges for generation to come.”

Audrey P. Marks, Jamaica’s Ambassador to the United States and Permanent Representative to the OAS, was also on hand at this special sitting of the OAS Permanent Council, called in the U.S. Vice President’s honor.

Among other areas he emphasized in his address to the ambassadors of the countries of the Americas, as well as observers and other guests, the Vice President pointed out that “as we strive to expand opportunity for our citizens, we must never forget that security is the foundation of our priority and under President Donald Trump.

“The United States has remained committed to working with our allies and partners to ensure the safety and security of our people across the hemisphere,” he told the Permanent Council, the second highest decision making body of the OAS after the General Assembly. Mr. Pence recalled that since its inception, the OAS has played a critical role is strengthening security partnership across the wider region.

Vice President Pence said there are tremendous opportunities to forge stronger trade relationships with countries in the hemisphere, and over the past year his country had successfully expanded access for vital agricultural products. The US is also strengthening its energy and infrastructure partnership across the region, he noted, and is working with Canada and Mexico to modernize the North American Free Trade Agreement (NAFTA) and to ensure that it holds to the original spirit of the special  trade arrangement.