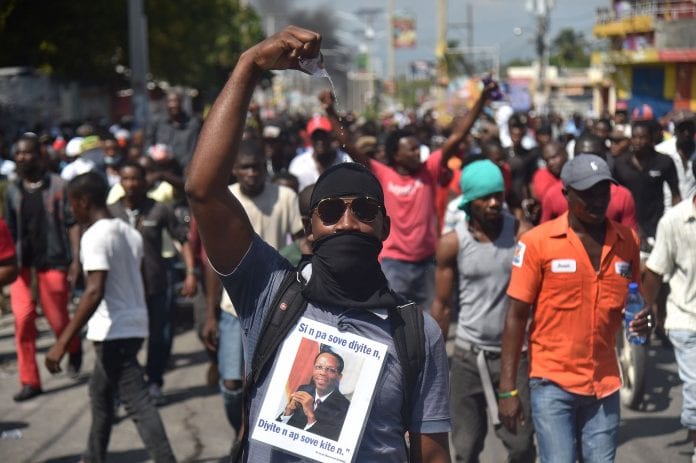 PORT AU PRINCE, Haiti, CMC – The United States is urging all political stakeholders to put aside their differences and work towards “a peaceful and democratic solution” to the protests in Haiti where opposition parties are demanding the resignation of President Jovenel Moise.

“The United States continues to urge all of Haiti’s political, economic, and civil society stakeholders to enter without delay or preconditions, an inclusive dialogue to identify and pursue a path to form a functioning government that will serve the Haitian people and address the country’s pressing economic and social concerns,” Washington said in a statement posted on the US Embassy website here.

Speaking on a radio programme here earlier this week, Moise reiterated the call for a national dialogue insisting “I am not attached to a mandate.

“I am hooked on reforms. I want to talk about constitutional reform, for example. I want to talk about the reform of the energy sector, the digitization of the public administration. Today, we are in an acute crisis, but we can take advantage of this crisis to make this crisis an opportunity. We need stability in the country and to find that stability, we have to attack the system,” Moise told radio listeners.

In its statement, Washington said that Haiti’s leaders need to work together “toward a peaceful and democratic solution now, with an increased sense of urgency.

“The Haitian people are suffering; we stand with those Haitians who value peace while courageously calling for accountability. The United States deplores the current gridlock in Haiti which directly contributes to violence, a spike in humanitarian needs, and interruption of daily life for the Haitian people,” the statement added.

Meanwhile, the Protestant Federation of Haiti, has announced plans to stage peaceful activities in the country “to implore God for Haiti”.

It said that the first activity which will coincide with the 502nd anniversary of the Protestant Reformation here, ends on Saturday, while the second activity is planned for October 31 to November 2.

Earlier this week, the Haitian Conference of Religious (CHR) staged a “national silent march” saying it had taken note of the “unprecedented humanitarian crisis in which the country is in the process of tipping over”

It said also that the situation “is the result of a much deeper crisis affecting the very foundations of our coexistence in its political, economic, social and religious dimensions”.