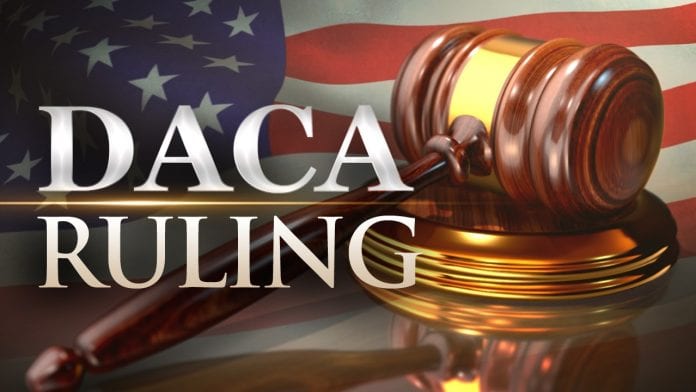 “Oh happy Day” sang Caribbean Americans twins Simone and Simon Briggs in unison over the phone on Thursday, responding to the earlier stunning announcement that the US Supreme Court had ruled against the Trump administration to continue the DACA (Deferred Action on Childhood Arrivals) program for individuals, called “Dreamers”, who were brought to the US as children by their undocumented immigrant parent.

The Briggs twins, residence of Perrine in West Miami-Dade, were brought to the US at age -18mths by their mother from Antigua. Now 22, the twins never returned to Antigua. They are currently second-year students at FIU pursuing business administration degrees. Simone Briggs told CNW, “I’m so happy and relieved, I could fly. I was really worried about the Court’s ruling against the program. Honestly, I am really surprised and grateful. Thank you Supreme Court! Now I can focus on my studies.”

Also expressing tremendous relief was South Florida Jamaican-American immigration attorney, Dahlia Walker-Huntington who happily told CNW, “Now I can breathe.” She said she was particular relieved for the thousands of young immigrants who have been living “traumatized” by the Trump’s administration intent to reverse DACA.

Another immigration attorney, Weston’s Caroly Pedersen, was also ecstatic at the Supreme Court’s ruling. “You have no idea what a tremendous relief this is for these young people, who were faced with the real possibility of deportation if the court had ruled otherwise.”

The Court’s decision was based on a narrow 5-4 vote with Conservative Chief Justice John Roberts voting with the four liberal justices.

This long-awaited decision gives much needed hope to some 800,000 young immigrants.  The ruling denies President Trump’s current bid to terminate the DACA program on the limited grounds that the Department of Homeland Security had failed to provide a reasoned explanation for its actions and had failed to comply with the procedural requirements for terminating the program. The Court’s opinion found the Trump administration had  “failed to consider the conspicuous issues of whether to retain forbearance,”, as well as the tremendous impact the decision would have on DACA recipients who have relied on the program.

In 2012, President Barack Obama issued an Executive Order to protect “Dreamers” who had been in the U.S. since June 15, 2007, had entered the U.S. before age 16, were under age 31 on June 15, 2012, and had no major criminal convictions. Under DACA, Dreamers received a two-year renewable immigration, and work authorization. In response to Obama’s action, several states including Texas, immediately filed lawsuits to stop the program. Pedersen said, “These cases are still working their way through the courts.”

Shortly after Trump assumed office in 2017, he abruptly cancelled the DACA program, claiming Obama’s executive order was illegal. Several states and others affected by the cancellation filed lawsuits to stop the administration’s pending plan.

Pedersen said, “While these lawsuits were partially successful in holding off full termination of DACA, they were not able to stop the program from ending for new applicants. The Trump administration has been fighting all efforts to save DACA and has repeatedly appealed to the conservative majority held Supreme Court, which it believed would rule in Trump’s favor and defeat DACA once and for all.

“But to the surprise of many, Chief Justice Roberts saved the day and joined the liberal justices in soundly rebuking the administration’s reasoning for terminating the program and the procedural steps used to eliminate benefits for Dreamers. However, It’s very important, to note the court did not issue a decision on the merits on whether or not the DACA program itself is legal. This leaves open the option for Trump to attempt to terminate the program again.”

According to experts, 90 percent of DACA recipients are employed; many possess advanced degrees, own their own businesses, employ U.S. workers, have American born children and some 30,000 work on the front lines of the COVID-19 crisis in healthcare professions.

“This generation of young immigrants are at the heart of our economy and represent the future of our country, we need to give them permanent protections and U.S. Citizenship!” Pedersen said.

Pedersen cited the Court’s decision will likely allow qualifying young immigrants to submit new applications for DACA benefits, at least for a period of time if the Trump administration doesn’t try to terminate the program once again, should Trump be reelected.