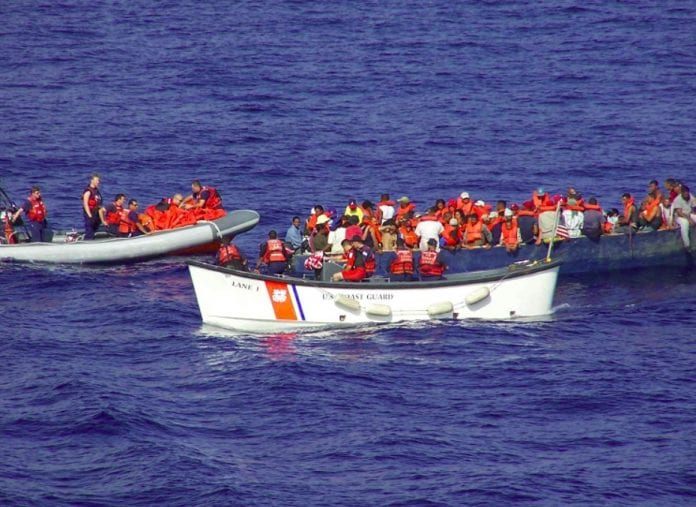 The United States Customs and Border Protection (CBP) agency says its Air and Marine Operations (AMO) Miami Air and Marine Branch (MAMB), working in partnership with the US Coast Guard (USCG) detected and interdicted a rustic vessel with 28 Cuban migrants on Friday.

The Coast Guard reports that watch-standers at Coast Guard 7th District Command Center received a report from the Cuban Border Guard Saturday of a northbound rustic vessel with about 25 people aboard.

An aircraft later located a 26-foot rustic vessel with 28 migrants aboard north of Havana.

The aircrew summoned  crew who intercepted the motorized rustic vessel and passed along a child life jacket, while remaining near the non-compliant migrant vessel.

After making the interdiction, CBP said the  crew “safely embarked 20 males, seven females and one child aboard the cutter.”

“The Coast Guard with our partner agencies will continue to patrol vigilantly to rescue and repatriate undocumented migrants who take to the sea,” Ryan said.

“Illegal migration at sea is inherently dangerous.  Air and Marine Operations aims to bring encounters like this to an effective conclusion, as quickly and safely as possible,” said Jeff Maher, Deputy Director Air Operations for Miami Air and Marine Branch. “By intercepting these craft offshore, AMO and USCG hope to deter others from undertaking risky and sometimes deadly voyages.”