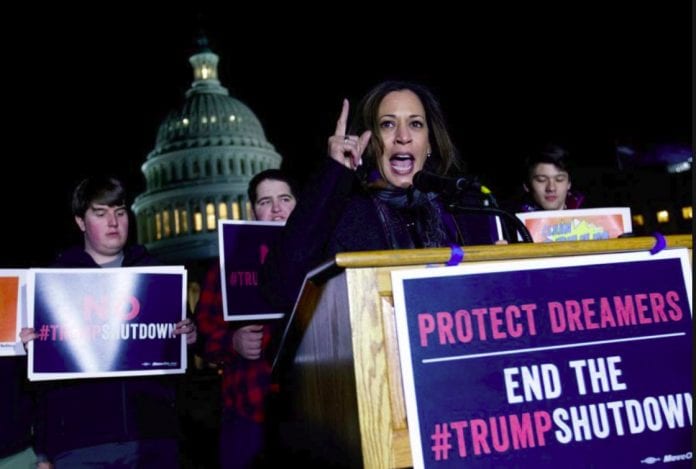 While many Democratic senators, led by Senate Minority leader Chuck Schumer, (D-NY), caved Monday and agreed to re-open the federal government without a deal on DACA, (Deferred Action for Childhood Arrivals), the senate’s only Jamaican roots lawmaker stood her ground and refused to blink from her position of ‘No DACA, No Deal.’

Sen. Kamala Harris, (D-CA), whose father was born in Jamaica, voted “no” again Monday on a bill to re-open the federal government, arguing that the budget should have done more to protect 800,000 Dreamers nationally.

Harris, who has been touted as a potential presidential contender in 2020, told CNN: “Our government made a promise to our Dreamers and it is long past time that we kept that promise. These are young people who are Americans in every respect except on paper. They have been waiting far too long to live securely in the only place they have ever called home.”

Will continue protecting Dreamers from deportation

“I refuse to put the lives of nearly 700,000 young people in the hands of someone who has repeatedly gone back on his word. I will do everything in my power to continue to protect Dreamers from deportation,” she added on Twitter.

Harris pledged to continue to work with fellow senators to find a long-term solution for all “members of our military and national security priorities, funds for children’s health insurance and community health centers, resources for those recovering from disasters like the California wildfires, and guarantee for a future for young immigrants who are as American as all of us.”

“We have 17 days to reach a bi-partisan agreement to protect Dreamers. We must pull together in this fight and get this done,” she added Tuesday.

The bill to re-open the government for the next three weeks, won 80 votes (to 18 against), as more than two dozen Democrats changed their votes.

Senate Majority Speaker, Mitch McConnell, (R-KY), has given a “commitment” to vote on a house bill on immigration that includes legalizing DACA recipients before February 8th.