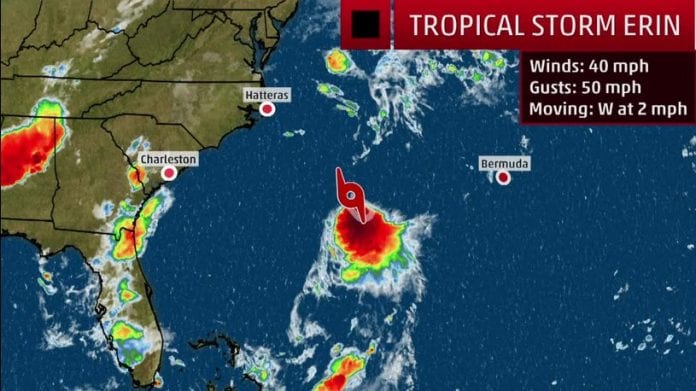 The system, which has been lingering in the open sea for several days, is the fifth named storm of the Atlantic hurricane season after being upgraded on Tuesday night as it became better organized.

Forecasters expect Erin to weaken and transition to an extratropical cyclone as it heads towards Nova Scotia, Canada.

At 6 am (local time), Erin was packing 40 miles per hour winds with higher gusts and was around 265 miles southeast of Cape Hatterras, North Carolina, and 435 miles west of Bermuda.

It was moving north-northwest at 6 mph but was expected to turn northwards later on Wednesday, then north-northeastwards early on Thursday with an increase in forwarding speed, forecasters said.

The Bermuda Weather Service said “Bermuda lies within a rather listless zone of transition between high-pressure ridging to the east and Tropical Storm Erin to our distant west.

“While a random brief shower can’t be entirely ruled out, we can generally expect more sun than cloud with a light to at times moderate warm breeze through Saturday,” it added.

Several islands in the Greater Antilles are still under a storm watch for Tropical Storm Dorian which should pass in Puerto Rico’s path later today.