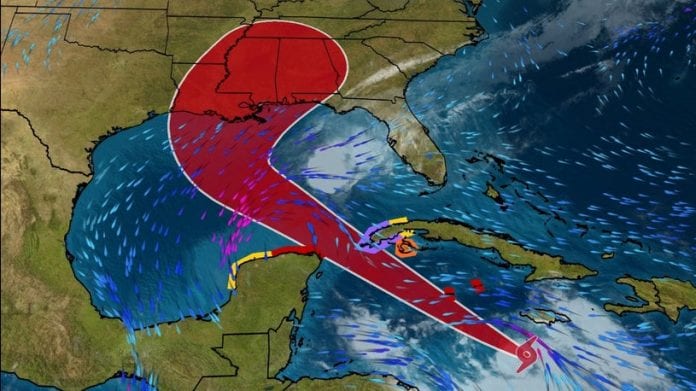 A strengthening Tropical Storm Delta is expected to move away from Jamaica later on Monday and is likely to become a hurricane tonight or on Tuesday as it moves near or over the Cayman Islands.

The Miami-based National Hurricane Center (NHC) said that the storm was about 165 miles south, south-west of Negril in Jamaica, and about 225 miles, south, south-east of Grand Cayman.

“The center of Tropical Storm Delta was located near latitude 16.1 North, longitude 79.2 West. Delta is moving toward the west near seven miles per hour (mph) and a turn towards the west-northwest is forecast later today.

“A faster northwestward motion is expected on Tuesday and Wednesday. On the forecast track, the center of Delta is expected to move away from Jamaica later today, move near or over the Cayman Islands early Tuesday, and approach western Cuba and the Yucatan Channel Tuesday afternoon or

The storm has maximum sustained winds of 60 mph with higher gusts and that “additional strengthening is expected during the next few days.

“Delta is expected to become a hurricane tonight or Tuesday before it nears western Cuba,” the NHC said , adding that a Hurricane warning is in effect for parts of Cuba, while Tropical Storm Warning is in effect for Cayman Islands including Little Cayman and Cayman Brac, Isle of Youth and the Cuban province of La Habana

The NHC said that a dangerous storm surge will raise water levels by as much as two to four feet above normal tide levels along the south coast of western Cuba near and to right of where the center makes landfall.

It said tropical storm conditions are expected in the Cayman Islands beginning late today or tonight. “

“Through midweek, Delta is expected to produce four to six inches of rain with isolated maximum totals of eight inches across Jamaica, the Cayman Islands and western Cuba. This rainfall could lead to significant flash floods and mudslides,” the NHC added.