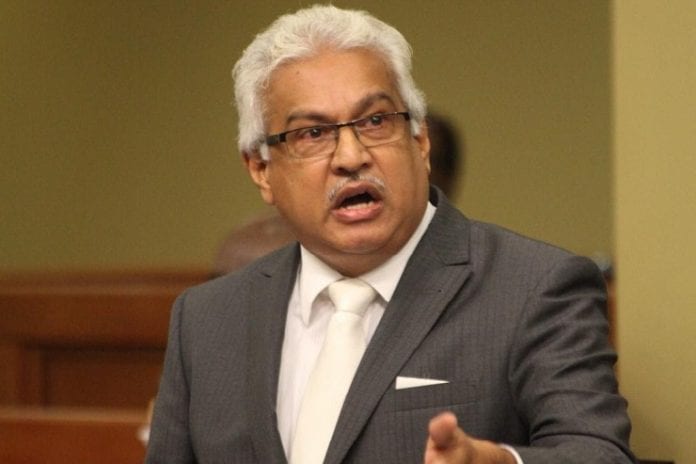 PORT OF SPAIN, Trinidad – Health Minister Terrence Deyalsingh on Monday expressed disappointment with “some people” who were blatantly flouting the protocols and measures put in place to prevent the spread of the coronavirus (COVID-19) after Trinidad and Tobago recorded its 15th death and crossed the 1,000 mark in positive cases.

Health authorities said that there were now 1,031 positive cases with 851 active. The country has recorded 15 deaths from the virus, almost doubling the figure in the past four weeks. The elderly man, the authorities said had pre-health conditions.

They said the 24 cases being reported now are results of samples taken during the period August 20 to now and that “this figure is not representative of the positive cases over the past 24 hours”.

Deyalsingh, speaking at the Ministry of Health virtual news conference, warned of the possibility of another lockdown of the country, if persons continue to disregard the protocols and the virus continues to spread significantly.

He said the authorities were seeking to prevent such a scenario “‘without jeopardising the total economic activity of the country, without a harsh lockdown again when only essential services were open.

“We are asking once again the public to please abide by the low cost, slightly inconvenient measures,” he said, telling reporters that he had driven around the Brian Lara Promenade in the capital, where he observed many people, standing together without masks and observing the six feet social distancing protocol.

“We see six people on one bench with no masks on. You see four people around the table where they play draughts…not a mask in sight, but then outside the banks where the mask policy is being enforced everybody has a mask.

“It just takes one person on that bench on the Brian Lara Promenade to start off a chain reaction which will again cripple the country. The fight of the coronavirus is not only in the hospitals, it is not only at the Ministry of Health”.

He recalled that when Trinidad and Tobago had started to reopen its economy, the authorities had warned members of the public that they had a significant role to play in ensuring the virus does not spread.

“Although many sectors of the public are behaving responsibly and I congratulate them and thank them, there are still pockets of persons who feel that the measures do not apply to them and that they are immune to the virus.

“You are not…the map of the virus is that we are not yet in the middle, we are still in the beginning and as the graph shows…as we open our economy we are following the identical global pattern of economies that are open with exponential spread and the only way to overcome this, is not be a total lockdown but by personal responsibility on the part of every citizen in Trinidad and Tobago,” Deyalsingh said.