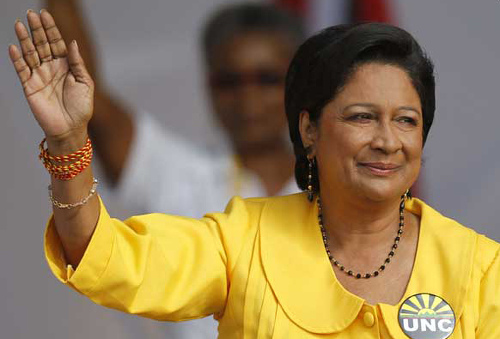 Trinidad and Tobago’s leader of the main opposition United National Congress (UNC), Kamla Persad Bissessar, has brushed aside calls for her to step down following the party’s defeat in the August 10 general elections, telling her detractors she was justified in not including them as candidates.

In a virtual report to party supporters on Monday night, Persad Bissessar, who led the party to two consecutive general election defeats, said that she has “noted the continued cries from some who are upset that they were not selected.

“It is disappointing that those who I once trusted and empowered, are now “gunning” for me. It really shows the true intentions of such persons because I am 100 per cent certain if they had returned as MPs or if we had formed the government, they would be singing another tune,” Persad Bissessar said, adding “all I have to say is that when they go low, we go high”.

Several former government ministers and opposition legislators have been calling on Persad Bissessar to step aside as party leader and have even erected billboards in various constituencies calling for her removal.

In her address on Monday night, Persad Bissessar, who in 2010 was elected as the country’s first woman prime minister at the head of a coalition People’s Partnership government, told her detractors “we have a greater duty at hand than to respond to convenient naysayers.”

Persad Bissessar said she had also taken note of those calling for her removal, adding “that’s their democratic right.

“The party will hold its internal elections when they are due. I will put my hat in the ring and I challenge you manos to manos, woman to woman, come forward and put your name next to mine,” she said, adding that she understands her detractors are looking for someone to challenge her “because none of them wants to put their name next to mine.

“If you really truly wanted to play a part in a democracy in a democratic party, you would call for the election. No they want me to resign. I am not resigning. I will call and the party will call the election when it is due and again I say come forward. I will take on all comers. I am not afraid of any of you.

“I have been here longer than you and I am far brighter than you can ever hope to be,” Persad Bissessar said, telling supporters “our duty of building a better Trinidad and Tobago remains.

“The party’s internal affairs are just that – our business,” she said, insisting that “the worrying part about all of this is that we are battling two pandemics, COVID and the Peoples National Movement (PNM).

She said that the Keith Rowley government is using the coronavirus (COVID-19) pandemic to further damage the local economy and predicting that the upcoming national budget on October 5 will result in more taxes on the population.

She said that the new Dr. Keith Rowley government “started this new tenure the same way they have left the last – bankrupt of any new ideas.

“What can we expect in this upcoming budget? (Finance Minister Colm) Imbert already said that property tax will be coming. Rowley said “dark days are ahead the same night he declared victory in August and they have started blaming COVID for everything as if they were not in office for the past five years and before that for a total of over 45 years combined,” she said.

“We in the UNC have proposed several initiatives that can serve as revenue-generating projects that will also create thousands of jobs for the people of Trinidad and Tobago,” she said, adding “my friends, the battle is not over.

“Many would like you to lose hope and accept defeat but the battle is only over when you give up,” she added.