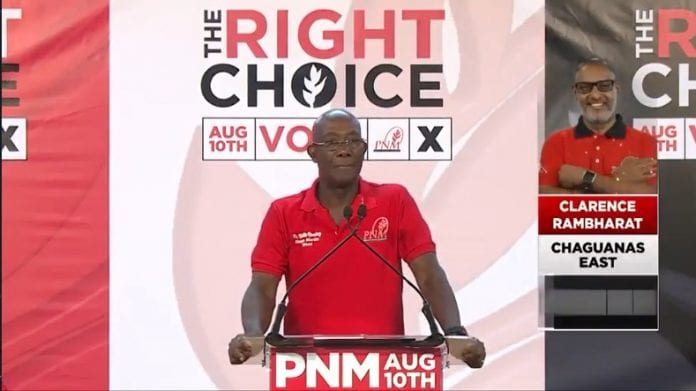 PORT OF SPAIN, Trinidad – Prime Minister Dr. Keith Rowley says it is unlikely that the Commonwealth would send observers to Trinidad and Tobago for the August 10 general elections, but that there has been a positive response from the caribbean Community (CARICOM) to the invitation.

Rowley, speaking on a People’s National Movement (PNM) “Friday Night Virtual Lime with Dr Rowley” said that he had received communication from the Commonwealth indicating that it had become expensive to undertake the venture given that the observers would have had to be placed in quarantine for a 14 day period as a result of the coronavirus (COVID-19) pandemic.

He said the Commonwealth had also pointed to the fact that there are no commercial flights to the country as a result of the lockdown of the borders due to virus.

He said the government had also explored the possibility of a third party assisting the Commonwealth team in getting to Trinidad and Tobago and is still awaiting a response from those parties.

Regarding the CARICOM observer team, Rowley said he had received communication from the Guyana-based CARICOM Secretariat indicating that three countries had agreed to provide a team.

“So we’re waiting to hear what that means. The Secretariat will now ask each country to send a representative,” Rowley said, adding that the CARICOM observers will also have to get here by this weekend.

But Rowley made it clear that Trinidad and Tobago is not worried at the possibility of no observers being able to arrive here.

“We’re no banana republic and overly troublesome – we conduct ourselves. Unless someone intends to misbehave,” he said, adding that while he would have welcomed the observer teams “sometimes they make interesting comments if you have to make adjustments”.

On Friday, the leader of the main opposition United National Congress (UNC), Kamala Persad Bissessar said almost two weeks after the government had indicated that invitations had been sent out, there were no public response to the invitations.

“With the heightened level of alertness after the new local cases of coronavirus (COVID-19), the window for the required 14-day quarantine period for observers before the election date is closing. The Prime Minister must act immediately to have these observers here by this weekend so they can be cleared in time for the election,” she said.