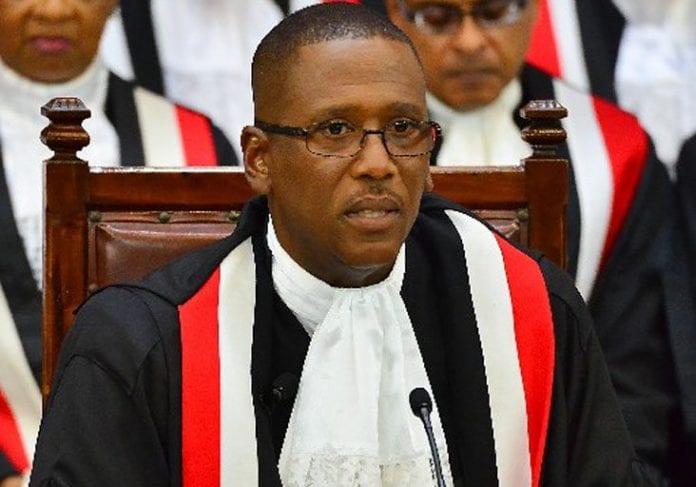 Trinidad and Tobago’s Chief Justice Ivor Archie Monday disagreed with statements made by two High Court judges urging him to reconsider a decision not to hold in-person hearings at courts, warning that if the rules and procedures laid down by him are contravened it would be at their own risk suggesting also that there could be consequences.

“By compelling people to physically attend upon you in a place in person, you assume a moral and legal responsibility to take all reasonable steps to safeguard their health and safety and to mitigate foreseeable risk,” Justice Archie said in a statement Monday, reiterating the original position because of the threat posed by the coronavirus (COVID-19).

The Chief Justice said that the judiciary will not support any maverick disregard of that responsibility. Justices Frank Seepersad and Carol Gobin recently wrote to the Chief Justice expressing their concerns with the banning of in-person hearings as part of a suite of changes in the Judiciary in the wake of the pandemic.

Seepersad last Friday said he took “serious issue with the practice direction’s interference” with his independence, case management decisions and removal of his discretion to determine if he should conduct a safe “in-person” trial at this time.

Justice Carol Gobin also called on the Chief Justice to reconsider the policy in the absence of reasons to support the ban on in-person hearings without an end date.

Justice Gobin said that had taken a stroll through the Hall of Justice and the 20 or so courtrooms were large enough to safely accommodate trials with the requisite protocols of physical distancing.

“It was eerie. Most were locked, all empty and abandoned for a reason which remains a mystery…This when the judiciary has from the inception been deemed an essential service and when as the Honourable Prime Minister continues to remind, we are not on lockdown,” she wrote.

“Surely the judges and all judicial officers who work in the system and the taxpayers who have paid for the court buildings and who even in these difficult times are paying for an expanding system of courts and court personnel, deserve better than this.

“The practice direction has effectively removed the ability of judges to perform one of their core functions, the trial of disputes, in an environment in which the public can have confidence,” she added.

“I worry about the effect of this draconian shutdown measure on the backlog especially in lower courts, on prisoners on remand and accused persons on bail who from my understanding have for the most part been logging on for adjourned dates.

“But I am sure that the Chief Justice will be accounting to the public in due course. He will no doubt be indicating how many criminal and civil trials at both levels have actually been heard since March 16,” she said.

In his letter, Justice Seepersad wrote “Chief Justice, this situation is untenable and though the statistics may demonstrate that hundreds possibly thousands of virtual hearings have occurred, it would be disingenuous to assert that the system is working.

“The disposition rate over the period of March to present must be well below average and would possibly believe any such contention. The citizens of this Republic surely deserve better,” he added.

But in his statement, the Chief Justice referred to Seepersad’s remarks as “the recent misguided missive,” adding “anyone who undertakes doing so in any location not designated by the Chief Justice for that purpose does so at their own risk and the liability, both legal and moral is theirs alone”.

He said that the judiciary also has a responsibility not to expose its employees to avoidable risk.

“Please note that judges are not the employers. It also follows from the forgoing that it would be highly irresponsible to send any of our staff to private premises over which we have no control. I do not believe that I need to explain the judicial inappropriateness of a judge sitting in a private lawyer’s chambers to conduct court hearings in person. The ethical issue is trite,” Chief Justice Archie said.

He said he recognises “the stellar effort of judges in all divisions to continue to deliver justice to litigants virtually.

“Judiciaries across the entire world are contending with the restriction of in-person hearings. With our virtual capacity, we are fortunate as our judiciary is ahead of many others,” he said, adding that medical professionals advise on appropriate measures, and as Chief Justice, he too takes advice from them.

The Chief Justice said that the judiciary is arranging for staff to be split into definitive teams so that they will do so on specific days if they must come to the buildings.

He said people, including judges who are not scheduled for the Supreme Court buildings on any given day, must not attempt to enter the building.

Chief Justice Archie said that this will mitigate against cross-contamination and ensure that the whole Supreme Court would not be required to self-quarantine at any given time.

Now is the time to use caution and take every precaution, he said, adding “it may make the difference between life and death for us judges, our devoted staff, stakeholders, litigants, and every member of their households”.