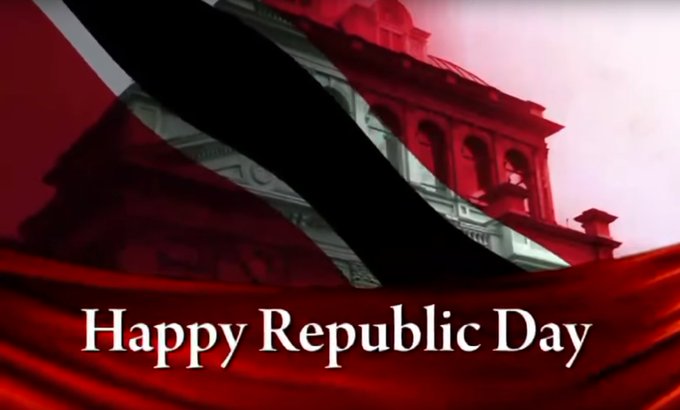 Trinidad and Tobago is celebrating its 45th anniversary as a republic with President Paula Mae Weekes calling for a “frank, dispassionate and throughout assessment” of the country’s development since 1976, while, not unexpected, the two main political leaders differed in their messages to the population.

The Head of State said that while disagreement and conflict were inevitable in the process of nation-building, it was important that any effort and discussion on improving the quality of life here should be guided through logic and evidence and goodwill.

“We must make a frank, dispassionate and thorough assessment of where we are as individuals, institutions and a people and, equally important, the part we played in getting here. Only then can we have any hope of arriving at a realistic and shared vision for Trinidad and Tobago.

“There is no getting around it, a sea change in attitudes at all levels is necessary to propel us forward; and while we look at the big picture of much-needed development and transformation, we must not lose sight of the fact that it is individuals working together that will bring about the desired progress.”

Weekes said for this occasion it was important not only for citizens to revisit the past, but also to learn from past difficulties, noting that some public commentators suggested that Trinidad and Tobago might have been better off remaining a British colony.

“We must be careful to avoid putting on those rose-tinted spectacles which encourage ‘misty watercolor memories of the way we were,’ while erasing the less salutary experiences of our past.

“Many commentators, unhappy with the present state of affairs, wax poetic about bygone days and go so far as to suggest that we were better off under monarchical rule. They forget the heavy toll of colonialism and the signal significance of our tiny nation severing the umbilical cord once and for all, and daring to go it alone.”

In his Republic Day message, Prime Minister Dr. Keith Rowley said  Trinidad and Tobago has done well as a republic, noting that other countries with the same republican status “have either unravelled or been caught in belligerence and ethnic warfare.

“To our credit, our Republic has kept together, and in our socio-political culture, we can claim some measure of civility and progress, and as a people, we have sought to build a strong nation, but there is much more to be done.

“History proves that nation-building is no easy, overnight task. It is said that man, as a social animal, recognises the need for communal bonds, and more recently a sense of nationalism to his sovereign state, because the alternative is each man to himself, or caught in tribal chaos.

Rowley said that the past year has been difficult for everyone here, given that the country Is still grappling with the effects of the coronavirus (COVID-19) pandemic and the fall in energy prices, which have meant a reduction in revenue.

“Thankfully the economy has been opening up in stages, and, with the anticipated cooperation of all citizens in the vaccination process, we continue to look forward to a return, in some form, to our way of life.”

Rowley said the recent announcement by the energy company, bpTT that it had begun production from its Matapal gas project, much earlier than expected, is expected to produce between 250-350 million standard cubic feet per day, which admittedly represents just over half of what the company produced on average over the past decade.

“Whilst this does not solve our gas problems, every little bit helps,” he said, adding that local investors have committed half a billion dollars in a hotel complex, in Tobago. “This too doesn’t solve all of our tourism problems but we are on our way,” he said, adding that the country’s borders “are opened at long last”.

“Let’s accept these as great news, and much-welcomed “gifts” to our Republic, and, in spite of our ongoing challenges over the past year let us add them to our celebrations today. Remember to vaccinate and follow all the other lifesaving protocols. We are still in a pandemic and the virus is still very much with us.”

But Opposition Leader, Kamla Persad Bissessar said the country is “under unprecedented attacks on every single independent institution” by the ruling administration.

“These sacred institutions are what hold our democracy up and they are what safeguards our citizens from the unstable nature of politicians. Unfortunately, what we are seeing today is an all-out assault on these independent institutions by the Rowley-led regime”.

She said that the current fiasco involving the appointment of a Commissioner of Police also embroils the Police Service Commission, the President of the Republic.

She accused the government of compromising the “once independent” Elections and Boundaries Commission (EBC).

“Furthermore, as we mark this 45th day as a Republic, all our basic rights and freedoms remain suspended. Under this present unjustified and unsubstantiated SOE (state of emergency), we have had our God-given rights and freedoms stolen by the PNM (People’s National Movement) as they seek to repress and silence all opposition, inside the Parliament and outside on the pavement,” the Opposition Leader added.