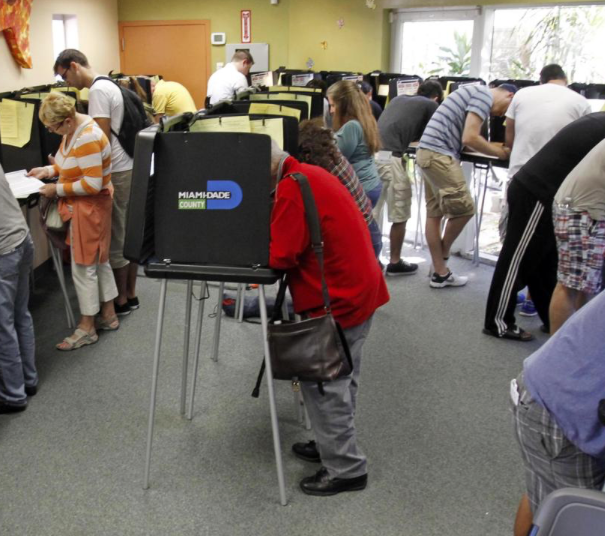 Democrats in Florida are still holding out hopes of riding the highly anticipated “Blue Wave” felt elsewhere across the nation, following a setback in Tuesday’s mid-term elections. Andrew Gillum, Democratic candidate for governor had initially conceded to his opponent late Tuesday night. However subsequently as the actual vote count continued it became apparent that it might be premature.

Meanwhile the race for US Senate between Democrat Bill Nelson and Republican Rick Scott remains “too close to call”. The latest preliminary vote count shows Scott leading by a tiny margin over  Nelson, who is seeking reelection.

According to Florida’s electoral law a recount can be requested if the losing candidate loses by less than 0.50 percent of the votes.

With votes still being counted in Broward and other counties the margin between Nelson and Scott will likely narrow making a recount almost certain.  The ongoing counts of ballots mainly absentee and provisional ballots could also shrink DeSantis margin over Gillum, and Republican Matt Caldwell over Democrat Nikki Fried for Florida Commissioner of Agriculture. Caldwell won by less than a 0.5 percent majority and that result could also be recounted.

Results in all Florida counties must be submitted by noon on Saturday November 10.

Tuesday night results were a tale of two halves of the same state. Gillum won by an average of 24 percent in Broward, Miami-Dade and Palm Beach counties, but lost in several of the counties above the I-4 Corridor in Central and South-West Florida. This was particularly so in Collier County home to Naples and Fort Myers were DeSantis won100,267 votes to 53,567 for Gillum. However, Gillum’s win in Broward County was particularly impressive. In that county Gillum received 67.43 percent of the votes to DeSantis’ 31.34 percent.

As far as the turn of votes indications are voters it seemed heeded the call to turn out to vote in South Florida. Turnout in Palm Beach County topped 62 percent, in Broward County 57 percent and in Miami Dade County the turnout was close to 57 percent. Despite the high turnout the data still showed significant percentages of voters did not turn out which could possibly have secured Gillum and Nelson’s victories.

This follows the same pattern as Democrat Alex Sink to Rick Scott in 2010, Charlie Crist to Scott in 2014 who lost by margins averaging 1 percent; with the majority Republican votes in North Florida being their downfall.

In other Florida races Democrats Donna Shalala and Debbie Mucarsel-Powell defeated their Republican opponents Maria Elvira Salazar and incumbent Carlos Curbelo respectively to be elected to the US Congress which the Democrats took control.

In municipal races in South Florida, Jamaican American Richard Campbell won his seat in the City of Lauderhill Commission as did Denise Grant.  In the City of Lauderdale Lakes, the winning candidates were Marilyn Davis and Beverly Williams.

Adding to the blues being experienced by Democrats in state races is the loss of African American Sean Shaw in his bid to be Florida’s attorney general.