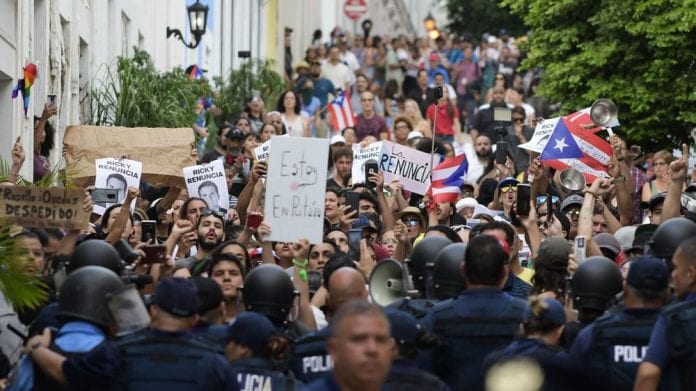 SAN JUAN, Puerto Rico – Thousands of citizens have gathered in Puerto Rico for the fifth day, to protest and demand the resignation of Governor Ricardo Rossello, following accusations of corruptions and leaked text messages showing the Governor making sexist and homophobic remarks.

Crowds of people gathered in the capital city, San Juan, for the fifth consecutive day to chant “Ricky, renuncia!” (“Ricky, resign!”). Police were eventually called to use tear gas to disperse the crowds.

The protests started on Saturday after the Center for Investigative Journalism released some 900 pages of text chats on the encrypted messaging app Telegram in which Rossello and 12 other male administration members joked about Ricky Martin’s sexuality, mocked women, politicians, journalists, disabled people and the victims of Hurricane Maria, one of the United States’s worst-ever disasters.

Puerto Rican celebrities and other influential figures have also called for the resignation of Rossello. On Wednesday, Ricky Martin led crowds of citizens in a protest to the governor’s house. The Singer expressed his views of Twitter, stating that “They mocked our dead, they mocked women, they mocked the LGBT community, they made fun of people with physical and mental disabilities, they made fun of obesity. It’s enough. This cannot be.”

Secretary of State Luis Rivera Marin and Chief Fiscal Officer Christian Sobrino, who made a joke about “salivating to shoot” San Juan Mayor Carmen Yulín Cruz in the leaked messages, have since resigned.

Meanwhile, Royal Caribbean is diverting a cruise ship away from Puerto Rico because of unrest on the U.S. territory. The cruise line has changed the itinerary for the Empress of the Seas, which sails out of Miami. The ship was re-routed to Tortola, and the company will refund guests for shore excursions.

The scandal comes as two other former top government officials from Mr Rosselló’s administration were among a group arrested by US federal agents last week and charged with conspiracy and fraud involving millions in federal funding.

Mr Rosselló has apologised for the messages and said he respected the right to protest peacefully. He has also vowed to provide greater transparency and accountability to his government.

In response to the scandal, the White House spokesman Judd Deere issued a statement, saying that the events “prove the president’s concerns about mismanagement, politicisation and corruption have been valid”.

Despite the ongoing protests, Rosselló has said that he will not resign, stating that “more than ever, a lot of people are counting on me”.