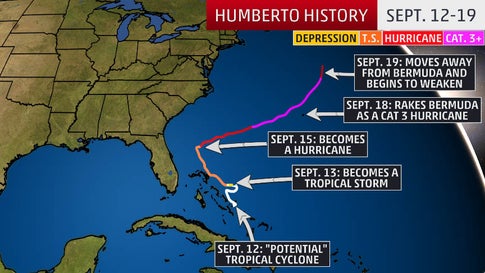 HAMILTON, Bermuda, CMC – Ferocious winds knocked out power to 80 percent of the island, roofs came off and trees were toppled as category 3 Hurricane Humberto hammered Bermuda on Wednesday evening, but police reported no serious injuries.

“We’ve made it through and everyone is safe. That’s what is most important,” said Premier David Burt.

National Security Minister Wayne Caines in a statement said it was a challenging night.

“ We have come through a really, really challenging night, there were no fatalities, our country is resilient – today we are going to get through this,” he said.

The Bermuda Electric Light Company (Belco), the island’s sole power provider, said at one stage on Wednesday night more than 28,000 of its customers had lost power.

The Somerset Police Station, to the west of here, lost part of its roof; although all officers were said to be safe

At the CedarBridge Academy shelter, windows were shattered, but none of the 46 members of the public or 30 support staff in the building was injured.

It’s also reported that many homes were damaged across the island, with Somerset appearing to be particularly affected by the destruction, as walls came down at the National Stadium.

At Humberto’s peak point of impact, at about 8.30 p.m. (local time), wind speeds of more than 81 mph and gusts of more than 114 mph, were recorded at L.F. Wade International Airport, that hopes to reopen on Thursday.

The storm’s closest point to the island came at about 9 pm when it was about 75 miles away.

Public schools and government offices will be closed on Thursday.

Caines said emergency agencies conducted an islandwide assessment and removed large trees which had been uprooted during the hurricane and were blocking main roads.

“Once the assessment has been completed, restoration of main lines, critical infrastructure and institutions will begin. Our priorities will remain with emergencies ensuring the safety of the public and Belco crews.”

The Department of Parks, the Department of Works and Engineering and the Royal Bermuda Regiment were out clearing roads on Thursday morning but some remained reduced to one lane because of large trees.

Early Thursday, the Bermuda Weather Service lifted its tropical storm warning as the hurricane had raced nearly 200 miles north-northwest of the island.

However, a government spokeswoman warned about the looming threat of Tropical Storm Jerry, which was more 1,300 miles southeast of Bermuda, but it is forecast to veer in the island’s general direction, next week.

Jerry is forecast to develop into a Category 1 hurricane later on Thursday.